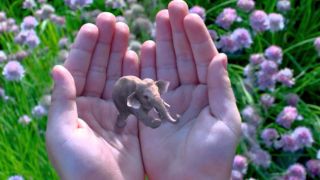 We could be a matter of months away from actually seeing a Magic Leap device on the market. The augmented reality kit could finally be getting its big reveal as early as mid-November.

That’s if a document discovered by Gizmodo is anything to go by. The document in question apparently contains a pitch for a livestream tour of the Magic Leap office in Florida from creative agency The Community.

Gizmodo has stressed that it looks like the document (while in fairly minute detail) is most likely a ‘best case scenario’ pitch, rather than a solid plan. Still, there is a section of the tour that was planned to include an easter egg of a telephone number that viewers would be able to either ring or text.

If rung, the viewer would hear whale-song, tying into the fact that whales are part of the brand’s identity. What’s interesting though, is that if the number is sent a text, it would respond with an “alternate image of the device”.

Put your money where your eyes are

An alternate image means that there will presumably be a standard image of the Magic Leap. Which would be a massive step for the notoriously secretive company. We have seen the inside of the Magic Leap office before with its How It All Began video below:

But we’ve never seen the product. Well, we’ve seen a pretty clumsy – definitely not a finished product – leaked image of what is likely a prototype. But it would be great to see an actual product. And we’re sure we’re not the only ones wanting to see a consumer-ready gadget.

With close to $2 billion in funding, we’re sure there are investors who would love to see a product finally hit shelves too.

When Gizmodo reached out to Magic Leap about the document, it was told that there was no event planned for mid-November, but didn’t answer questions about if there was going to be an event of any kind soon, or about the authenticity of the document.

Presumably, because of the intense level of detail in the pitch, it would be a massive give-away for Magic Leap to confirm how far along its plans to open its doors to the world actually are.

The world of AR has moved on a long way since Magic Leap first burst on to the scene in 2014 promising a true augmented reality experience. It may be that now AR is becoming a commonplace technology, Magic Leap will be slightly less magical than we’re all hoping. But there’s no harm in hope, is there?