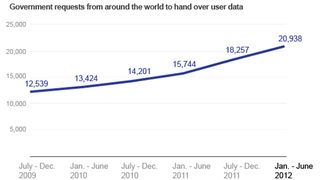 Requests are on the rise

Google has increasingly been pressed to hand over user data and remove content by governments and courts from around the world, according to its latest transparency report.

There was a total of 20,938 user data inquiries from governments in the first half of 2012, and those requests were for information regarding 34,614 accounts.

"Government demands for user data have increased steadily since we first launched the transparency report," said Google in a blog post announcing the new statistics.

The governmental contact with the search engine doesn't stop there.

Google also received 1,791 removal requests from government officials around the world regarding 17,746 pieces of content.

By comparison, government requests to remove content from Google's services were flat from 2009 to 2011.

"It's spiked in this reporting period," said Google's blog post. "One trend has become clear: government surveillance is on the rise."

Google's transparency report not only aggregates the number of user data and content removal requests, it breaks the statistics down by country and includes detailed annotations.

The United States leads the user data inquiries with 7,969 requests, more than three times as many as India, the next country on the list.

Google noted that this number includes requests issued by the U.S. on behalf of other governments due to treaties and other diplomatic mechanisms, but it doesn't detail the percentage.

The United Kingdom is No. 6 on the list, having 1,425 user data requests with Google fully or partially complying with 64 percent of those inquiries.

China doesn't appear on the list of countries probing for user data, but Google does call it out for requesting that content be removed from the search engine.

"We received a request from [China] to remove a search result for linking to a site that allegedly defames a government official," Google said in its country-by-country breakdown.

"We did not remove content in response to this request."

However, Google did note that China made at least two of its products, Google Sites and YouTube, inaccessible for a period of time.

The local law enforcement in the United Kingdom was denied a request to remove 14 search results that linked to sites critical of the police and claimed individuals were obscuring crimes.

Courts in the United States had a similar outcome for YouTube videos critical of local and state government agencies, law enforcement and public officials.

Google, standing its ground, only removed defamatory speech about individuals and small groups, or trademark violations.

"We received a court order to remove 1,754 posts from Google Groups relating to a case of continuous defamation against a man and his family," Google said.

"We removed 1,664 of the posts, which fell within the scope of the order."

Similar cases involving defamation of organizations and individuals resulted in the removal of 233 of 641 search results.

When it came to trademarks, Google said it removed 156 search results because web pages used a trademark in violation of an earlier order.

A new report every six months

Google's latest transparency report accounts for January to June 2012. The next set of statistics are due in six months.

"When we first launched the transparency report in early 2010, there wasn't much data out there about how governments sometimes hamper the free flow of information on the web," Google said.

"We think it's important to shine a light on how government actions could affect our users."