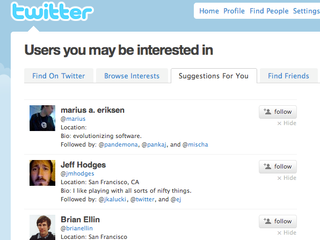 Twitter users have clocked up an impressive 20 billion tweets since its creation in 2006, once again proving the on-going popularity of the micro-blogging site.

A graphic designer from Tokyo (@GGGGGGo_lets_Go) lays claim to the 20 billionth tweet, which translates as: "So that means the barrage might come back later all at once."

In other Twitter news, the site has rolled out new features which should make it easier to find new people on the site to follow.

Taking a leaf out of Facebook's, er, book there is now a 'suggestions for you' feature that shows a list of people you might be interested in following.

The feature is algorithm based and is meant to be catered to the types of people you already follow.

In our quick tests it does seem to lean heavily on celebrities, rather than 'real' people but we are sure it will improve in time. This can be found in the Find People section of the site – although it doesn't seemed to be rolled out for all as of yet.