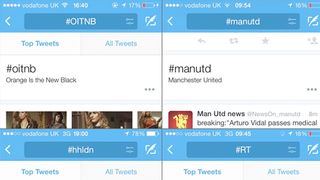 Understanding the meaning behind popular Twitter hashtags can at times be tricky. There's acronyms, no spaces between the words and sometimes people don't even have the common decency to use casing.

Twitter is testing a new feature that could make things easier for those struggling to decipher the message behind trending tags, by spelling them out for some users of the iOS app.

The Wall Street Journal reports popular tags like #tbt and #smh are being explained as 'Throwback Thursday' and 'Shake My Head' when users click on them.

Likewise #OITNB appears as Orange is the New Black and #manutd is expanded to Manchester United, with Twitter giving users the opportunity to rate the interpretation for accuracy.

It's not clear how wide the test is right now. It's common for Twitter to trial new features on a small percentage of its use rbase before rolling them out.

In this case a hashtag codebreaker would certainly be a welcome addition to the service.