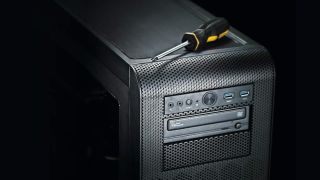 When it comes to a lagging PC or smartphone, TechRadar Pro readers place the most blame squarely on their internet connectivity, ahead of their computer or handset’s actual hardware not being up to scratch.

This revelation comes from a computing survey we ran last month, which asked the question: What do you tend to blame if your PC starts to lag? Followed by the same question probing what’s blamed in the case of smartphones.

With PCs experiencing lag, the most popular area to pin the blame on was the machine's internet connection, which was cited by 29.8% of respondents.

Internet woes came in ahead of blaming the actual PC’s hardware itself, which was in second place but a long way behind on 18.3%.

In third position was the operating system, with 15.8% of readers most likely to blame the OS for any poor performance issues. Hardware didn’t come much ahead of software, in other words, but both were considerably behind net connectivity.

Looking to other software aside from the OS, coming fourth was security or antivirus apps which picked up 10.6% in our poll. And narrowly behind that was the web browser on 10% exactly.

The rest of the blame game results were as follows, from sixth place onwards: other software (i.e. utilities) was on 4.7%, followed by productivity apps on 3.8%, then content creation apps and games which were tied for last place on 3.5%.

Last place, of course, being a good thing in this case.

As for smartphones, the results stacked up pretty similarly, at least at the top of the frustration rankings, with most readers – 26.2% – again blaming internet connectivity as the most likely culprit if their handset starts to lag.

Again mirroring PCs, that was followed by blaming the phone’s hardware in second place on 24.1%, and the operating system itself was the third most likely offender on 20.9%.

The main difference between phones and PCs is that here it’s a far closer race between blaming the internet, hardware and OS. In other words, phone owners are more likely to be down on their hardware or OS than PC users.

The other results for phones produced considerably smaller percentages than PCs, with the rest of the rankings being as follows, from fourth place onwards: productivity apps (5.9%), other software like utilities (5.4%), web browser (5.1%), content creation apps (4.7%), games (4.4%), and in last place security and antivirus software (3.3%).

Software aside from the operating system, then, is far less likely to cop any blame when it comes to a lagging phone compared to a PC.

It’s also interesting to see that security and antivirus apps are the least offending category for phones, when they were the fourth most-blamed bugbear on the PC (with a chunky 10.6%).

A big thanks to everyone who participated in our illuminating survey.