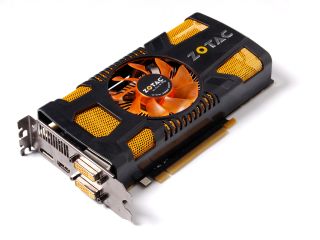 Zotac's version of the latest GTX 560

The GTX 560 is the latest graphics offering from Nvidia as the company continues its long-running competition for gamer hearts with AMD.

Following the path laid down by Nvidia's last two 500 series cards, the 560 offers around a 30 per cent improvement on the GTX 460 but, impressively, uses 20 per cent less power.

Although much of the tech under the bonnet is similar to the GTX 460, the GTX 560 follows in the footsteps of the GTX 580 and GTX 570 in its incrementally rejigged GPU architecture, offering extra streaming microprocessors – 8 to the 7 already in the 460 – and with it another 48 CUDA cores.

The clockspeeds of the GTX 560 might raise some eyebrows though.

At 820MHz and 1640MHz for the chip's core and shader speeds the touted GF114 GPU at its heart is clocked significantly higher than any card Nvidia has released in living memory.

Overclockers may wonder though just how much extra they'll be able to get out of the card, with the 560 clocked so much higher than any of its predecessors.