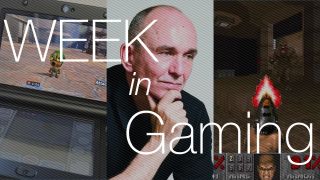 So maybe no one will buy you chocolates shaped like circulatory organs this year. Perhaps no one will turn up at your door holding a bunch of deceased plants. And sure, you might not have any bits of paper coming through your letterbox declaring rather hyperbolically that you're the world's best boyfriend or girlfriend.

You're probably not the world's best anything, let's be honest. But that's no reason to be sad. Games are still your friends. Games will always love you, and so do I. I mean, I love games. Not you. Sorry.

The best thing about this Valentine's isn't going to be food or presents or smooches from your chosen loved one/cat. It's the release of the New 3DS. Some of you lucky bums already have one - either through the Ambassador early release or because you totally cheated and bought one from another country.

The rest of us will be sitting cross-legged beneath the letterbox waiting for that lovely new console to drop into our hands. Oh, the faceplates! The SNES buttons! The increased screen size and smaller memory card! So much to love. I'm pretty sure it's going to be the happiest day of my life.

If you are spending Valentine's with a loved one, but you're scared that they don't like your grand romantic gesture of a handmade voucher offering one free trip to Pizza Hut (unlimited salad bar included), then don't worry - your week can't possibly be as bad as Peter Molyneux's. The evidence against him started stacking up with a rather awkward interview with Gamespot in which he essentially admitted to ignoring the demands and promises of the Kickstarter that funded his newest game, Godus, as he'd recently told TechRadar.

What's happened there is akin to preordering, say, the next Taylor Swift album for £20, only to find out that she decided to record a solid two hours of cats mating. And no, you can't have a refund, because you clearly don't understand the process of making ART.

But even worse than taking a load of money for something you don't actually end up making or possibly even finishing is 22Cans' treatment of Bryan Henderson, winner of the incredibly boring Curiosity, in which you tap cubes to make smaller cubes until the cubes go away to reveal more cubes AD INFINITUM.

His prize, according to compulsive over-promiser Molyneux, was a cut of the profits of Godus (the Kickstarter alone raised $750,000) and the ability to help with the game, alongside regular contact with the studio. Has he received any of that? No, and he'd be better off hoping for a rare bootleg of the classic album, Taylor Swift's Cat Screams.

Oh, and on top of that, Peter's now saying he'll never speak to the press again...

Also, what's going on with Bethesda? They've just invited us to their (get this) first ever E3 conference this April, but they haven't said what it'll be. Now, Fallout 4 has been swirling around the rumour bowl for a while, and we can't say we wouldn't be excited if that was the case... OR, alternatively, they could just be talking about the Elder Scrolls Online, which is still delayed for console release and has been pretty broken on PC so far. Let's hope not, yeah?

That's all the news straight from the games watercooler this week (it's like a regular water cooler, but 8-bit, and the water has a +2 health buff). If you're still feeling bummed about Valentine's, watch the video below - you'll forget all about it. You'll also forget all about your sanity. Good luck.