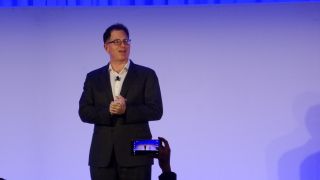 Who would have thought that the battle between Macs and PCs would take place in London? But that's precisely the location as Dell CEO Michael Dell fired back in an interview with the UK Telegraph to explain that the PC is not dead, despite Apple CEO Tim Cook's claims in an earlier interview with the same publication.

Some 13 years after Apple debuted its "I'm a Mac" campaign to extoll the virtues of its computers over a Windows machine, the renewed battle today is being fought by the iPad Pro and tradtional PCs.

As the iPad Pro went on sale earlier this week, Cook said that he travels only with the 12.9-inch slate and an iPhone.

Cook asked, "I think if you're looking at a PC, why would you buy a PC anymore? No really, why would you buy one?" Apple has been busily promoting its new iPad Pro, which runs the mobile iOS software and not the desktop-class OS X operating system, as a PC replacement for "many, many people."

The success of the iPad Pro will be important for both Apple and Dell. Even though Apple's iPad line of tablets remain the market leader, consumers are not upgrading as quickly as Apple would have hoped, and Apple's larger screen smartphones are cannibalizing on sales of its slates.

Similarly, the PC market has been in decline. However, analysts forecast a bright spot with hybrid devices, also known as convertibles, which can replace both a laptop and a tablet, much in the same vein that Apple has been pitching the iPad Pro. PC makers are replicating the success that Microsoft has been having with its Surface line of slates. Dell even announced a re-imagined XPS 12 convertible with a 4K display and keyboard dock.

For a commercial device to be successful, it must satisfy the security and manageability needs of IT, be driven by design and a simple UI and come with peripherals that enhance productivity, said Raza Haider, Executive Director of Dell's Commercial PC Product Group, in a prior interview with techradar pro.

Dell and its PC rivals may also soon get a boost from businesses as they begin the upgrade process to Windows 10 and Intel's new Skylake processors.

Intel is also pushing for PC users to upgrade their hardware. With more than half a billion PCs on the market that are more than five years old, Intel claims that Skylake will offer a vastly superior experience than what users are accustomed to.

Even though the PC market remains vital to Mr. Dell's company, it's finding more competition from smaller, connected devices that are getting more powerful. Internet of Things devices collect more data, and there is incentive for companies to understand the data.

Apple is making a push into this space. In his interview, Cook hinted that Apple is working on a connected health-focused wearable device that will collect more data.

Last month at Dell World in Austin, Texas, Mr. Dell touched on the importance of his $67 billion acquisition of data storage provider EMC. The deal, one of the largest in tech history, also includes VMWare, which will allow Dell to progress in the cloud business. Dell and EMC could help other companies, like Apple, build servers to store, manage and analyze the collected data.

As Apple and Dell are fighting for consumer dollars, both companies are united in their views of privacy.

"To protect people who use any products, you have to encrypt," Cook explained. "You can just look around and see all the data breaches that are going on."

Mr. Dell and Cook are both staunch opponents of the UK's Investigatory Powers Bill, which would force technology companies to create encryption backdoors for law enforcement purposes.