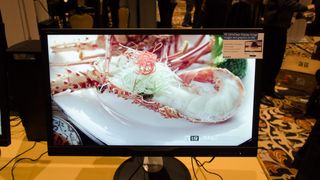 4K is set to take over our desks

4K has been hailed as the big next thing for entertainment and AV in the consumer arena.

All big television manufacturers have one or more 4K television sets in their portfolios and as such components prices (including the panel) are dropping fast. Consumers are becoming increasingly aware of the technology too.

4K essentially allows more pixels to be shown on any given display, up to four times full HD; which means going from about 2-megapixels to 8-megapixels.

Business environments that extensively use multiple monitors on a day-to-day basis (trading desks, editorial, finance, content creation, startups and multimedia companies) are likely to benefit a lot since that jump in resolution negates the need for expensive setups.

In comparison, a 4K monitor would usually sit on the desk with one cable for data and another for power. That makes it an ideal companion for laptops as they'd usually have only one video output.

Most 4K displays on the market are large format televisions with prices hovering around £3000. In comparison, there is a small but growing number of 4K monitors at the other end of the spectrum with prices starting from less £500 - little more than the combined cost of four 21-inch monitors.

They tend to have a smaller diagonal (around 28-inch) but that makes them ideal for closer viewing (around 50 cm between the display and the viewer's head).

A diagonal smaller than 28 inches is likely to strain the user's eyes while anything bigger than a 40-inch is likely to cause neck strain because of the much wider viewing angle when sat very close to a display of that size.

Other than the need for 4K monitors to drop in price, the other requirement for 4K to become popular within businesses is that system manufacturers must deliver more (affordable) products that can support 4K out of the box at a competitive price.

This means, for example, more laptops or docking stations with HDMI 2.0 or DisplayPort. Delivering more than 8 million pixels however requires some serious firepower even for non-gaming applications, which is why it is recommended that you use a laptop with a relatively recent processor, either with a video chip onboard or with a dedicated one.

Note that you will be able to use HDMI 1.4 to drive 4K content although that will be limited to 30Hz and 8-bit.