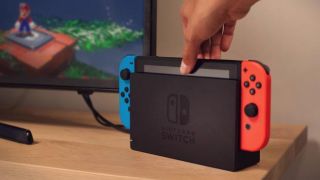 The Nintendo Switch is a great choice of console, whether you're a seasoned gamer or looking for your first console.

Its wealth of classic Nintendo characters and franchises mean it already offers plenty of great games, with more (like Pokemon Sword and Shield) still to come. It also offers two controllers for multiplayer straight out of the box.

But gaming can be an expensive hobby. Consoles aren't exactly cheap, and that's before you take into account games and accessories. The good news is that with some clever planning you can find the best Nintendo Switch Black Friday deals and Cyber Monday offers to make things more affordable.

Plus, the newest addition to the Switch family of consoles, the Nintendo Switch Lite, also makes for a very attractive proposition - offering access to an incredible lineup of games for a lower price.

As a result, it's always best to keep an eye out for bargains - especially as we approach Black Friday. Here's our guide to grabbing yourself a Nintendo Switch deal this season.

In the fast-paced, trolley-dashing, mad-clicking Black Friday sales, indecisiveness can be the difference between snagging a bargain and the dreaded "out of stock" message.

The key is to settle on your product of choice nice and early - if you're looking for a Switch Lite, for example, which color will you go for?

Whether you’re going for a Switch or Switch Lite, there are bound to be bundles on offer that include games. With that in mind, make a shortlist of three or four games you’re looking out for - there’s nothing worse than picking the console and agonizing between which games you’re after and ending up empty handed.

You may also find those same games discounted elsewhere, so be prepared to be flexible. If you want to pick up a Switch Lite with The Legend of Zelda: Link's Awakening and Mario Kart 8 Deluxe, but one ends up cheaper elsewhere - grab one in the bundle and snag the other one elsewhere.

Black Friday has become more prevalent in recent years, and retailers love getting involved. In the US, the big names including Best Buy and Walmart have offered discounts on consoles and the Switch during previous Black Friday/Cyber Monday periods.

Over the last few years, UK retailers like Game, Currys PC World and John Lewis have offered some great discounts on tech and gaming gear - so those are good places to start.

Of course, the elephant in the room is Amazon - and for good reason. The retailer's Lightning Deals have gone from stock-clearing exercises to bona fide deals. From the Amazon homepage, you can navigate to the "Today's Deals" section for an overview - and these will be constantly changing throughout Black Friday.

Don't forget, the company's Prime membership offers free shipping but also early access to the Lightning Deals. Given that these are time-sensitive and subject to stock, it's worth picking up a month's trial (or maybe paying for a month) so you can get the jump on non-Prime members.

It's worth noting that you're unlikely to see any Nintendo Switch Black Friday deals appears in Amazon's Lightning Deals section - if the console is to get a discount, it'll be outside of this area.

However, we've seen in the past that any half decent Nintendo Switch Black Friday deal sells out really quickly, so if you'll want to make sure you're primed and ready to click if you have your heart set on a purchase this year.

Of course, it's not just Black Friday these days - aside from the following Monday being branded Cyber Monday, many retailers jump the gun considerably to get customers involved.

That means it's worth scouring the aforementioned retailers nice and early from the start of November - you never know what you'll find.

This might not be too obvious, but it can be a handy weapon in your deal-hunting arsenal. Those of you on Twitter can set up notifications for Nintendo Switch deals from trustworthy accounts.

This means every time TechRadar tweets a deal, you'll get a notification. It's nice and simple to setup, too.

Just head over to @TRDeals for your mobile device, follow, and then click the little "bell" icon next to the "Following" button. This will send a notification whenever a deal pops up - very handy indeed.

You can also use Google Alerts, which allows you to specify exactly what you want t be notified about (such as 'Nintendo Switch Black Friday deals'), and then sends you an email whenever anything relevant appears online.

Nintendo may lag behind Microsoft and Sony when it comes to online presence, but the company offers plenty of discounts on digital games.

Once a game is on your Wishlist, you can get a notification that it’s on sale - allowing you to swoop in. Just make sure you have enough space on your SD card.

Head over to the Nintendo eShop to find the current Switch eShop deals.

5. Tune in to TechRadar

Of course, you’re already in the right place for deals. We’ll have coverage highlighting the best deals of Black Friday - for Nintendo Switch and everywhere else.

Be sure to check our Nintendo Switch deals page over the coming weeks for plenty of savings.