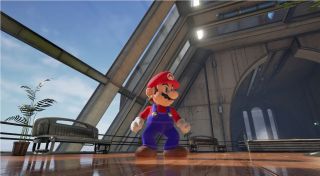 Super Mario 64 was a revolutionary game, and many argue that it set the bar for 3D platforming for nearly every game made for the next decade. It was the first major success on Nintendo's 64-bit system, and, even though it hasn't quite stood the test of time, looked darn good for a game made in the '90s.

But what if the development team behind Gears of War took a shot at recreating Mushroom Kingdom's veteran good guy for the big N's next system, the Nintendo NX? What if it got a facelift using one of the most dynamic design tools available to developers? And, stay with me here, what if it was set in some of the creepiest pre-defined environments to ever grace video games?