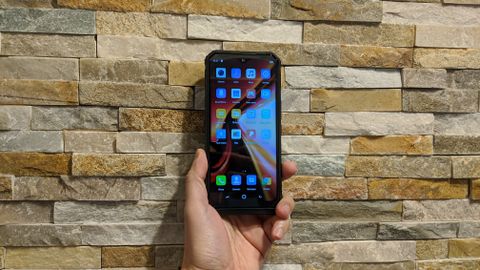 The Doogee S95 Pro is a remarkable rugged smartphone in a competitive market
(Image: © Future)

Doogee delivers yet another great piece of engineering with the S95 Pro, the fastest non-Qualcomm ruggedised smartphone that came through our labs. It has almost everything you’d ask from a solid, waterproof smartphone at a very palatable price.

Gearbest sells the Doogee S95 Pro for $470 at the time of writing with the two accessories; without the speaker and the battery, expect to pay $370 only. Save $5 on the bundle with the coupon code T3DC9DF8B54F4001. Note that, while this price includes delivery, it is exclusive of any taxes that may be levied by the relevant authorities or the courier companies on behalf of the vendor.

This is the golden age of ruggedised smartphones; heated competition between some of the smaller players and the increasing realisation by a growing audience that a bog-standard smartphone is often fragile and by the time you put a casing, you might just as well buy something that’s waterproof, shockproof and scratchproof.

With that in mind, meet the S95 Pro, a top of the range smartphone from prolific rugged device manufacturer Doogee.

Doogee provided with a rather sizeable parcel. The phone itself was housed in a smaller box with the detachable speakers and the battery pack separately packaged. There’s no earphones, but you do get a fast charger (24W), a USB cable, an actual physical product manual, a pair of wipes, a warranty card and a screen protector.

The design language of Doogee has evolved over the past three years into something more refined, through hundreds of man hours of research and development. You can check past reviews of the T5, the S50, S60, S70, S80 and S90 to see how that has changed.

It weighs 284g without any accessories and the battery pack bumps it to 390g. Its overall size, 167 x 77 x 16mm, is significant without being overwhelming. Put it this way, it feels reassuringly heavy and chunky thanks to a metal frame covered with what Doogee’s marketing department calls “industry-leading rugged rubber sheet”

There are two SIM trays, a first in a smartphone to our knowledge, the second one can take either  microSD card or a second SIM. Having two of those make it a bit less cumbersome to swap cards or SIM.

There’s a dedicated SOS button on the left edge and a power off button, a fingerprint sensor and a volume rocker on the opposite edge. On the back are located three camera sensors plus a lonely LED flash. The Type-C connector at the bottom is covered with a rubber flap, a hint that this phone is IP68/IP69K and MIL-STD810G tested.

The S95 Pro uses a Mediatek Helio P90 chipset, which competes squarely in the mid-range battleground, facing the Qualcomm Snapdragon 710. It is paired with 8GB of system memory, likely to be LPDDR4X type and 128GB Samsung UFS 2.0 storage. Not as fast as SSD in laptops but still far faster than the usual eMMC found elsewhere.

Like its predecessor, Doogee’s new flagship product supports wireless charging (up to 10W). This one however significantly improves its photo credentials thanks to the presence of no less than four camera sensors including the popular Sony IMX586, a 48-megapixel one, which is complemented by two other 8-megapixel sensors. Also in the front is a 16-megapixel front facing selfie camera.

Other noteworthy features include NFC, a 5150mAh battery, a 6.3-inch screen with a 2160 x 1080 pixel resolution and Corning Gorilla Glass 5 overlay; sadly no oleophobic coating here. The battery pack has a 3500mAh capacity and magnetically attaches to the phone; the speaker module has a stand and two 27mm speakers. It has a separate battery that can last for 10 hours and, unlike the battery pack, will cover the phone’s camera.

Note that these accessories are not waterproof or shock resistant; dropping is likely to cause damage.

Here’s how the Doogee S95 Pro performed in our benchmark tests:

3DMark Slingshot Extreme: Did not run

The S95 Pro uses a stock version of Android 9.0 Pie; there were no updates available at the time of writing; the latest update dates from October 22, 2019 with the September 2019 security patch.

Featurewise, you get a useful SOS alert call setup, DuraSpeed (which limits the impact of background apps) plus the ubiquitous toolbag, a set of apps that can be found in most Mediatek-based rugged smartphones. Two features that stand out are the sound meter and the barometer.

When it comes to overall performance, the S95 Pro is by far the most powerful Mediatek-based rugged smartphones we’ve ever tested but it still lags the Snapdragon 845 found in the AGM X3. It still delivers some great numbers both when it comes to general graphics performance (thanks to the PowerVR GPU).

Ditto for the storage subsystem which fared much better than eMMC storage. The adoption of the UFS protocol means faster and more consistent performance as the benchmark numbers have shown.

The BV9800 Pro from Blackview is probably the one rugged smartphone to beat at the time of writing. Blackview took the unusual route of indiegogo to make its project become true. With the backing of more than 2,700 investors and more than $1.1 million investment, the 9800 Pro, which should sell for about $500, has less memory (6GB) and a weaker CPU (Helio P70) but a much bigger battery and a unique FLIR Lepton Thermal Imaging camera.

The S95 Pro has fundamentally reshuffled the very top of the rugged smartphone market. It is fast, it has plenty of storage and memory and a useful set of (optional) accessories plus very solid photographic credentials.

With an affordable price tag and few minor letdowns, the S95 Pro will provide a great experience for those looking for a great all-rounder that can perform everywhere and anywhere, regardless of the weather and location.

Doogee has hit a sweet spot but watch out for models from Blackview and Ulefone that are set to launch soon. And check out the dark horse that is AGM Mobile when it announces its annual flagship model.