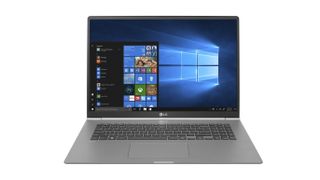 Laptops with large screens are usually considered unwieldy and cumbersome, unless you're talking about Apple's 16-inch MacBook Pro.

However, the LG Gram 17 is an exception, giving even Apple's slimline device a run for its money. Weighing only 2.95 pounds, it's hailed the lightest 17-inch laptop ever made and a snip at $1,245.

In designing a super thin and light laptop with a 17-inch screen, LG has succeeded where all other have failed. The device has been so well received that retailing giant Costco even commissioned an exclusive version for its customers.

LG Gram 17 (2019)  - $1245 at Amazon
Want a laptop with an enormous screen, but don’t want to lug around a monster? The LG Gram is your only choice. It's sleek, powerful, and has plenty of memory and a numeric keypad. Plus, its price tag is unlikely to give you a heart attack.
View Deal

It's not waterproof or shockproof, but its magnesium alloy chassis makes it more resistant than most laptops of this size. It also boasts a dedicated numeric keypad and adheres to the rigorous MIL-STD-810G standards.

It's worth noting UK customers will also be able to purchase the Gram 17 straight from Amazon, but should be wary of additional taxes levied.