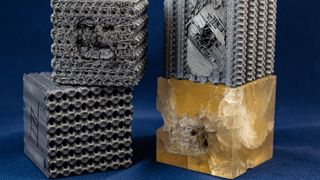 The latest innovation in 3D printing – a field where fresh developments are really coming thick and fast – is the ability to create cubes which are capable of stopping bullets.

This feat was achieved by researchers at Rice University’s Brown School of Engineering, who have printed cubes of ‘tubulane-like ultrahard polymers’ which are lightweight and full of holes, but as hard as diamond.

The bullet fired at 5,800m/s (a seriously fast projectile) was stopped in the second layer of the tubulane cubes, with no ‘significant structural damage’ observed beyond that layer. However, in a solid reference cube made of the same material, cracks ran all the way through the block (the bottom-right cube in the above image).

Tubulanes are structures of crosslinked carbon nanotubes, but remain as yet undiscovered and purely theoretical. But in this work, the theoretical idea has been scaled up to produce said polymer cubes – with these apparently highly impressive results.

Graduate student at Rice, and lead author of the project, Seyed Mohammad Sajadi, also noted that when subjected to crushing forces in a laboratory press, the tubulane blocks collapsed in on themselves without cracking.

He added that such tubulane-like structures fashioned from polymer, or indeed metal, or ceramic, would only be limited by the size of the printer making them.

And furthermore that optimizing the design of the lattice could mean better materials for all sorts of industries, from automotive through to aerospace, civil engineering, and sports, or even biomedical applications.

Oil and gas companies will also likely want to adopt this kind of tech to fashion strong and durable materials that can be used in deep well construction. And given the bullet-stopping experiments going on here, it’s not hard to imagine that perhaps some kind of lightweight bulletproof vest could be concocted, or armor for military vehicles like tanks.

Meanwhile, on the building front in general, 3D printing is already being used as we recently saw with the largest (two-storey) 3D-printed building ever constructed over in the United Arab Emirates. And there’s also the prospect of autonomous eco-cities comprising of 3D-printed houses made principally from mud (yes – just the soil right there on-site).