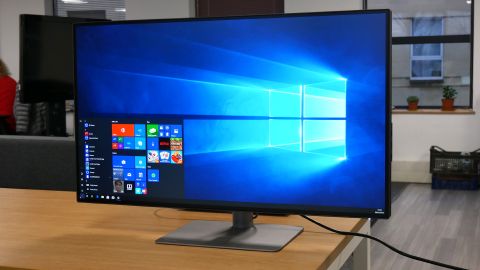 A Mac-friendly 4K monitor that will also please creative pros on the PC thanks to a strong feature set including Thunderbolt 3.

Apple’s epic new Pro Display XDR is a truly spectacular monitor. At six grand with a stand, it’s also megabucks. Which leaves plenty of space for high performance displays aimed at Macs - and indeed PCs - to undercut it while still offering a premium experience.

Of course, the PD3220U still comes in slightly over $1,000. For that you get a high quality 31.5-inch IPS panel offering a full 4K resolution and support for multiple colour space modes. The PD3220U also offers not just USB Type-C connectivity with charging support but full Thunderbolt 3 capability, allowing multiple displays to be connected via a single cable and then daisy chained.

At $1,199 in the US and £1,059 in the UK, the BenQ DesignVue PD3220U is one of those ‘tweener monitors that’s clearly priced above value-oriented screens but also well below studio quality or true professional monitors. Given the strong feature set and high quality design, it offers strong value. But if you just want a decent, frills-free 4K 32-inch monitor with a good panel, then there’s better value to be had elsewhere, including from BenQ itself.

Thanks to its slim, black framed bezels and space grey stand, the BenQ DesignVue PD3220U is more than merely sympathetically styled when hooked up to an Apple MacBook. It looks like a monitor Apple itself could have come up with.

That’s a compliment rather than a dig. The slim symmetrical bezel - the same width on all four sides rather than just the usual three - is particularly pleasing. We suspect a pair of PD3220Us running in parallel would look particularly fine. The aforementioned stand, incidentally, adjusts every which way, including rotation into portrait mode.

That’s just the first of a long list of features and capabilities that will please content creators. Next up is a quality 31.5-inch IPS panel with 3,840 by 2,160 pixels for the full UHD experience. BenQ says the panel is good for 100 per cent of the sRGB colour space and 95 per cent of DCI-P3. BenQ doesn’t quote a figure for Adobe RGB. But based on the DCI-P3 claim, it’ll likely be some way short of 100 per cent. Which is to say this screen has solid but not spectacular support for the most popular colour spaces used by creative pros.

For the record, further colour space modes include Rec. 709, along with an HDR mode and CAD/CAM, Animation, Low Blue Light and Darkroom modes, among others. 10-bit per channel colour is also on offer.

Speaking of HDR, BenQ says the PD3220U has HDR10 ‘content support’. That’s a reasonable way to put what isn’t true HDR capability, not with a maximum brightness of 300cd/㎡ and no local dimming. But the point is that you can view HDR with correct colours, which is very useful from a content creation perspective.

The PD3220U’s other big draw involves a pair of Thunderbolt 3 ports. One supports 85 watts of charging while driving the display, the other 15 watts. Even better, you can daisy chain another monitor using the dual Thunderbolt ports, allowing you to drive two monitors with a single cable from your Mac or PC.

The PD3220U also has a USB hub including both USB Type-A and Type-C ports. Wrapping up what is a very comprehensive feature set is a KVM switch and BenQ’s Hotkey Puck. The former makes it easy to share the PD3220U over two machines. The latter is handy for quick jumping between colour spaces and other presets.

For the most part the BenQ DesignVue PD3220U delivers pretty much what you expect from this class of display. Which is to say it’s not far off glorious.

Quality modern IPS panels like this typically have few weak points and that’s very much the case here. Gone is the anti-glare sparkle and off-angle glow that used to blight even good IPS monitors. This thing just looks pure and clean and rich and accurate.

Similarly, the viewing angles are impeccable and the overall effect of the bob-on basic image quality combined with the minimalist design and the quality feel of the chassis makes for a very satisfying display. Yes, it costs over $1,000. But the sense is that it’s worth every penny.

What’s more, thanks to those color space presets, you can get to work straight out of the box. If you’re looking for weaknesses, they’re reserved for elements that are apparent on the specification sheet. For starters, with 3,840 by 2,160 pixels across a 31.5-inch panel, you’re looking at a pixel pitch of around 140DPI. That’s good by PC monitor standards. But it’s a fair distance off the 200-plus DPI of Apple’s Retina displays.

At 300cd/㎡, the PD3220U is likewise far from the brightest display out there and isn’t capable of true HDR visuals. But then that’s not what this display is for. It’s for content creation, not content consumption, in which context burning the back of your retinas isn’t required or desired

The same applies to the mere 60Hz refresh. While the PD3220U will turn its hand happily enough to gaming, assuming your graphics subsystem is man enough to drive all those pixels, lacking 144Hz-plus refresh is hardly an issue given the pro remit.

From a value perspective, you can make a case both for and against the BenQ DesignVue PD3220U. On the one hand, it’s way cheaper than the likes of Apple’s Pro Display XDR. On the other, other 4K 32-inch monitors are available for far less cash. Indeed, BenQ itself will sell you just such a display.

What you won’t get by spending far less is the same features, performance and quality that’s on offer from the PD3220U.  The panel quality is very high, features like the Thunderbolt connectivity and daisy chaining support are a major boon for usability, and the whole thing oozes quality.

If we do have a reservation, it’s that the colour space support is merely good rather than excellent at this price point. While the range of presets is fine, the extent to which DCI-P3 and, we suspect, Adobe RGB is covered could be a tad better. That minor caveat aside, the BenQ DesignVue PD3220U is a very fine hunk of expensive but satisfying screen.