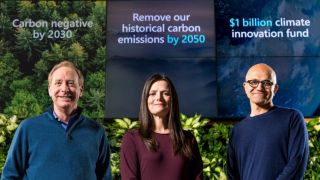 Microsoft has announced ambitious new plans to cut its impact on the environment.

The computing giant is set to go a step further than most by pledging to become "carbon negative" by 2050.

It says it will also work towards removing from the environment all carbon emissions the company has ever produced, either directly or via electrical consumption.

Microsoft has been working towards achieving carbon neutrality since 2012, mostly by investing in offsets that avoid emissions rather than actively removing carbon from the environment.

Microsoft President Brad Smith says the company recognises its efforts to date have not been extensive enough. “Neutral is not enough to address the world’s needs,” he said in a blog post. “While the world will need to reach net zero, those of us who can afford to move faster and go further should do so.”

Further to its new pledge, Microsoft also announced an initiative that will harness its technology to help suppliers and customers reduce their own carbon footprints, as well a $1 billion climate innovation fund. The fund is designed to accelerate the global development of carbon reduction, capture and removal technology.

In the name of transparency, the company has promised to publish an annual Environmental Sustainability Report, which will update the public on the progress of its environmental initiatives.