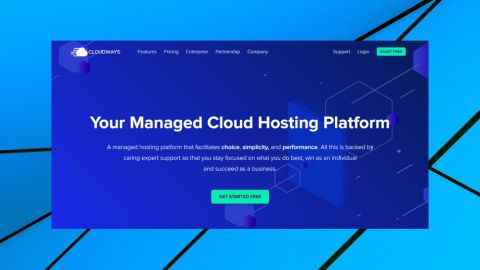 Cloudways is an unusual cloud website hosting platform for experienced users who demand the maximum power for their projects.

Create a cloud server on Cloudways and it's hosted on your choice of five top cloud providers: Amazon (AWS), DigitalOcean, linode, Vultr or Google Cloud Platform. That gives you access to 60+ data centers – and there's no need to have an account with any of these, as Cloudways sets up everything itself.

Unlike shared hosting, these cloud servers give you dedicated resources to improve website speed and stability. But that's just the start. Cloudways supports a bunch of other performance-boosting technologies, including PHP7, Memcached, Varnish, Nginx, Redis, HTTP/2, and even the company's own CDN. You don't have to know about any of these – mostly, they just work – but there are various tweaks and customization options if you need them.

Cloudways isn't just about low-level technical detail. You also get automated installation of some popular apps: WordPress, Magento, Drupal, Joomla, OpenCart, PrestaShop and Laravel. That can't compete with the hundreds of apps you get with something like Softaculous, but a generic 'PHP application' option enables installing others, and of course you're able to manually install whatever else you need.

Elsewhere, free Let's Encrypt SSL certificates are on hand to secure your sites, and on-demand and scheduled backups come for free.

There's one notable catch, though: Cloudways doesn't provide any email accounts. If you need mailboxes for your domain (yourname@yoursite.com), you must add them via add-ons priced from $1 per account per month.

Cloudways pricing is inevitably a little complicated, as there are different plans available for each of Cloudways' cloud providers.

Linode has 10 plans for instance, DigitalOcean has 11, AWS has 14, and – you get the idea. Each plan might vary in price depending on the data center you choose and the resources you're allocated. But as this is cloud hosting, you can change these at any time, maybe adding extra RAM or storage as required.

Fortunately, you can ignore these complexities, at least initially, and start with one of the low-end plans.

Keep in mind that while we're quoting monthly prices, that's just to make for easier comparison with other providers. In reality, you're billed per hour for the resources you use. For example, that $80 a month system actually costs $0.1111 an hour, or $2.67 a day.

Apart from the convenience of not having any fixed contracts, this also enables trying out high-spec systems for very little cost. If you're unsure whether that $80 server will really supercharge your website, for instance, try it out over a weekend and you'll pay under $5.

Even better, Cloudways offers a free three-day trial, no credit card details required. That's brief, and only gets you a relatively basic server (2GB RAM, 1 Core, 50GB storage), but it's enough to get a very good idea of how the service works.

Cloudways server setup is easy, with all the main functions you need combined into a single panel.

The process starts by choosing your cloud provider and preferred server size. We opted for DigitalOcean, and accepted our standard 2GB trial server.

An 'Applications' list includes various apps which you can preinstall on your server: WordPress, WordPress with WooCommerce, Laravel, Magento, Drupal, OpenCart, PrestaShop, Joomla and more.

You're able to give a custom name to your managed application, server and project, which is handy for identification if you set up several.

Whatever options you choose, the current hourly and monthly cost is displayed at the bottom of the page.

Once you've finished, click Launch and Cloudways adds and activates your server. This only took around six minutes for our test setup, but if you get bored, a three minute tutorial video explains how to migrate your existing WordPress site to Cloudways (the company has its own free WordPress plugin, Migrator).

Cloudways servers are managed from a custom control panel, rather than a standard cPanel or Plesk-type setup. It's relatively complex and mostly about the low-level detail of your server configuration, but don't be intimidated – there are some speedy shortcuts.

You can head off to the setup page for your application in just a couple of clicks, for instance. Our WordPress page had screens to set up a domain, or install a Let's Encrypt SSL certificate with a click. If you don't have a domain just yet, Cloudways allocates temporary URLs for your website and admin panel, and we were able to access the standard WordPress Dashboard with a click. And once you're there, you can work on your website as normal.

The Cloudways control panel has some useful options. A Monitoring tab charts your CPU usage over time, for instance. If it's consistently high, that's going to affect your performance, but heading off to the Vertical Scaling tab enables increasing your server resources with a couple of clicks.

A Backups feature enables running backups on demand, or automatically on your preferred schedule.

An SMTP tab lets you set up outgoing emails from your server, plus a Settings and Packages panel allows configuring PHP settings, PHP and MySQL versions and more. Also, a Security section enables blocking specific IP addresses from accessing your resources.

If that's still not enough, experts can log into the server via SSH to inspect and tweak whatever settings they like.

Cloudways plainly isn't aimed at web novices, and its control panel can seem complicated at first, but overall, it's really not difficult to use. If you have enough knowledge and experience to set up a site with WordPress, you'll have no major difficulty doing this with Cloudways.

Getting started with Cloudways may be relatively straightforward, but its unusual architecture and interface means you'll want to check out the manual – just occasionally.

Tapping a 'Need a hand?' tab on the right side of the screen opens a well-presented Help Center. Useful beginner-friendly articles are highlighted upfront, including a Getting Started guide, advice on adding and launching new applications on your servers, and details on how you can connect to your setup using SFTP or SSH.

Although Cloudways is aimed at developers and expert users, its support articles are readable by just about anyone. Key steps are described in a sentence or two, with minimal jargon, while multiple screenshots highlight where you need to click, type, or otherwise set up your system. If you are an expert, you might be left wishing for a little more low-level information and guidance, but everyone else will appreciate the clear and simple advice.

Searching the knowledgebase revealed even more surprising examples of attention to detail. We searched for 'WordPress', for example, expecting a couple of articles on setting up the application on a server – but Cloudways went much further. There were individual articles on migrating your WordPress sites from specific web hosts, for instance (Bluehost, Siteground, GoDaddy, HostGator, Namecheap, and more), details on setting up WordPress with various caching schemes, troubleshooting some WordPress issues, and more besides.

There's also community support via the Cloudways forum. You may never want to use that forum, but it's still worth a look before you sign up to see what real Cloudways users are complaining about and discussing.

If this doesn't work for you, 24/7 live chat is available for everyone, and there's ticket-based support if you need it (though not with the trial, unfortunately).

Measuring web host performance is always a challenge, as there are so many variables involved, but Cloudways takes this to a whole new level of complexity. The speeds you'll see will vary depending on your chosen provider, the data center, the application you're using, your server setup, and your own location, amongst other factors.

We set up a simple test, anyway, using Uptime.com to monitor a DigitalOcean WordPress setup at five-minute intervals over three days.

Our site had 100% uptime, as we would expect over such a short testing period.

Response times ranged from 293-379ms with an average of 299ms, speedy for a WordPress site. (Many hosts take longer to serve the much simpler static site used in our regular performance testing.)

Consistency was another plus, with most response times within a few milliseconds of the average. That's what we'd expect from a quality cloud provider, but it's good to see it confirmed here.

As we mentioned above, these figures are very general indicators only, and your results could be very different.

Keep in mind that Cloudways servers are charged by the hour, though, so there's plenty of scope for running your own speed tests. You're able to play with different providers, data centers, server specs and settings, all at minimal cost, and find out who delivers the best speeds for you.

It's overkill for beginners, but experienced and demanding users will find Cloudways offers powerful and high-performance cloud hosting solutions for a very fair price.