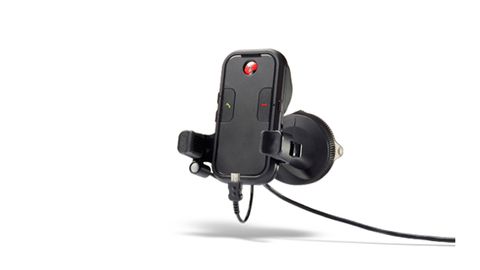 £20. That's the price difference between this Hands-free car kit for your Smartphone and the cheapest TomTom sat-nav, the Start 20 UK & Ireland.

£20 doesn't seem like an awful lot, especially when the difference between the two products is so vast, so its £20 we were eyeing up before we even opened up this kit that turns your smartphone into your in-car navigation.

The TomTom Start 20 is a stand-alone sat nav offering lane guidance, spoken street names and access to TomTom's maps. This hands-free kit meanwhile relies on your mobile phone to do the hard work and merely holds your phone at the right angle. Actually it does a little more, but we're not convinced it really does enough.

The kit itself is made up of several parts, but the main unit is a reassuringly robust holder for your phone, boasting an integrated 2W speaker, an extendable microphone and a charger.

This unit plugs into your cigarette lighter via standard USB cable and charger, while a pass-through cable can be used to charge your phone while you're out and about too. This last point is important because using your phone's GPS will rapidly run down your phones battery on even a modest journey.

The big selling point for the TomTom Hands-free car kit is that despite plugging in to your phone and holding it in place, the communication is actually handled over Bluetooth. This means you can enjoy hands-free calling, even when you're phone isn't docked. Simply pair the car kit and your phone up and you're good to go.

The mounting system is versatile, capable of holding your phone in portrait or landscape mode and as it support phones up to 127.5mm high and 80.5mm wide, it should hopefully outlive your current mobile phone. We did find it quite a bulky mounting system though, requiring locating higher up the screen that we'd want with a dedicated sat-nav, and thus obscuring more of the windscreen.

In operation we found the TomTom Hands-free car kit for Smartphone to be lacklustre. The speaker volume was a little louder than the phone itself, but still too quiet to have your radio on at the same time. The standard Google Navigation voice sounds fine coming from the phones speaker, but sounds clipped and hollow through this.

You could use the kit to transform your phone into your in-car music player, but the speaker quickly shows its weaknesses here, and well, basically you'll only try this once and then never murder your music collection like that ever again.

The pricing hangs heavy over this kit as a value proposition too, coming in as it does so close to TomTom's own budget sat nav, the TomTom Start 20. We'd pick that up over this every time.

If you do want to use your phone as a sat nav, car kits for the most popular phones can be picked up for less than £10, with more versatile units with charges bouncing in for £20.

Of course such bargain solutions don't have the Bluetooth cleverness that TomTom has used, but then having used it, we're not convinced that such features add enough to warrant the price hike anyway.

TomTom is capable of much more than this, but as it stands it just doesn't do enough to warrant the high price tag. Even spend more on a proper sat nav, or a little less on a cheaper mounting system. Just don't bother with this.