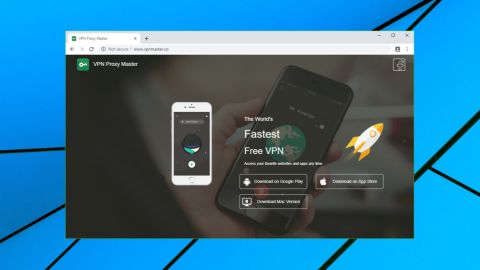 VPN Proxy Master works as a free way to unblock some streaming sites, but we wouldn't trust the service with anything serious.

Some VPNs struggle to make themselves stand out from the crowd, but VPN Proxy Master isn't one of them. The website boasts that it's the "world's fastest free VPN", and whatever the truth of that, the reported 60 million plus users suggests that it's doing something right.

The range of apps gets the company off to a good start, with downloads available for Android, iOS and Mac.

Network size isn't as much of a highlight, with servers in seven locations only: Canada, Germany, India, Netherlands, Singapore, UK and US. Still, we've seen free products with less.

The free service has plenty of ads. There are animated icons begging to be clicked, full-screen video ads which demand you "wait 5 seconds to skip", another ad embedded in the Disconnect dialog – and unexpected notifications if you've left the service turned off.

Plus points include instant access to the network, with no signup, no usernames, and no need to hand over your email address or other personal details.

There are no annoying bandwidth restrictions, either. You can use the service as much as you like.

If you need more, upgrading to the paid VIP service drops the ads and gets you access to faster servers. Monthly prices are steep at $11.99, but choose the annual plan and this plummets to $3, and there's a free seven-day trial on offer.

The company claims it runs a ‘no log’ network, stating: "We do not collect logs of your activity, including no logging of browsing history, traffic destination, data content, or DNS queries. We also never store connection logs, i.e., no logs of your IP address, your outgoing VPN IP address, connection timestamp, or session duration."

While that sounds great, there's, well, a problem. If you put those lines into Google, you find they're taken directly from ExpressVPN's own privacy policy. If VPN Proxy Master has created a privacy policy by cutting and pasting the best bits from its competitors, then that suggests it sees the document as more about marketing than being honest about its own practices. And if that's the case, why should anyone believe a word it says?

We noticed something else interesting, too: VPN Proxy Master isn't the only VPN provider using this document. The Google search returned multiple hits to privacy policies with the same text, all hosted on anonymous AWS web pages, but referring to developers with names like 'Lemon Clove' and 'Autumn Breeze.' They also turn out to be largely anonymous providers with single-page websites, virtually no background information, and yet they still have a couple of VPN apps available.

None of this is absolute proof that something shady is going on, but that's not the point. If a VPN is going to deserve your trust, it should be open and transparent, and VPN Proxy Master is neither.

Be very, very careful when searching for VPN Proxy Master on your mobile app store. There are a host of other apps which use very similar names and logos, presumably hoping you'll not notice and install them, instead. Ideally, follow the download links from the official app site, or otherwise look for an app called ‘VPN Proxy Master’, with the developer listed as 'Innovative Connecting.'

Once you've located the right store page, everything else is easy as there's no need to create an account or hand over any details. All you have to do is install and open the app as usual.

The interface is almost as simple. A big ‘Go’ button automatically connects you to the fastest server, or you can get specific and choose your preferred location from a list. Server load indicators help you make the best selection, and you're also warned if a server is full.

The free version has plenty of ads, including annoying full-screen pop-up video types with timers to prevent them being closed immediately. They mostly appear when you're performing some app task, though, so if you just leave VPN Proxy Master running in the background, you're unlikely to be hassled.

Performance was disappointing in our tests, especially for a service claiming to be the world’s fastest free VPN. Our best European speeds struggled to reach 20Mbps, UK to US connections managed an unimpressive 14Mbps and Singapore averaged 10Mbps.

The service did better at site unblocking, allowing us access to BBC iPlayer and US YouTube, but failing with Netflix.

Would upgrading to the commercial VIP plan make any difference? We tapped 'Go Premium for Free' and agreed to the seven-day trial.

Getting rid of the adverts was an immediate relief, and the upgrade also allowed us to choose locations from the Faster Server tab. These included some locations labelled for top streaming services - Netflix, iPlayer, Fox, more - which should mean you won't have to try multiple servers to find one that works.

We ran our unblocking tests again, and upgrading had done the trick: we were able to access US Netflix this time, as well as BBC iPlayer.

Our performance checks also showed some improvements, with UK speeds up to 35-40Mbps, US servers climbing to 18-20Mbps and Singapore a similar 12Mbps. That's still not fast, and probably not enough for the price you're paying, but it's just about enough to handle most tasks.

VPN Proxy Master isn't as fast or as capable as it pretends, and although it claims there's no logging, the company gives us no reason to trust it. Unlimited bandwidth VPNs can always be useful as simple website unblockers, but we wouldn't use it for anything even slightly important.