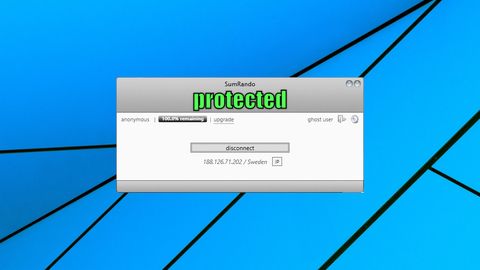 Few locations, minimal features, a clumsy client, below average speeds: there are no reasons at all to buy a SumRando account, but the anonymous free account might just about be usable for basic tasks.

Founded in South Africa in 2011, SumRando CyberSecurity now offers a VPN, proxy and secure messaging service from the beautiful island of Mauritius.

The company website is surprisingly quiet about its VPN features, and the few bits you can read are surprisingly disappointing. "SumRando VPN uses 128-bit encryption" says the site, like we're supposed to be impressed (everyone else uses 256-bit). "For use on Windows and Android devices", it goes on: unlucky if you prefer Apple.

Browsing the FAQ page gave us the list of locations: Sweden, Ireland, the Netherlands, the US, Hong Kong, Singapore, Spain, Brazil, Turkey, and Jordan. That's alarmingly short, but the company does state that it "owns its own hardware", and if it has more control over the servers that could improve security. Maybe.

SumRando does have an anonymous free plan which you can use without any registration at all, not even your email address. Bandwidth is very limited at 1GB per month, and you can only access some of the servers (which doesn't include the US), but that could still be enough for occasional or light use.

Signing up for the commercial plan gets you unlimited bandwidth along with more and faster servers, and can be yours for $10 billed monthly, or $6 on the annual plan. That seems expensive to us for what you're getting, especially as capable VPNs including NordVPN and CyberGhost can charge less than $3 a month on their two- and three-year plans.

SumRando tries to be clear on its logging policy, stating that "we do not monitor what you do while connected to the service." But a FAQ page explains that there is some session logging, including "your connect and disconnect times, the amount of data transferred for accounting purposes, and other account management information to make sure things work for you."

That "other account management information" seems a little vague, but the privacy policy may offers some clues, where the company lists the data it might store about paying customers: "name, username, password, geographic region, email address, phone number, credit card and billing information."

That's quite a list of items. On the plus side, it didn't correspond to our experiences later, as the company only required our email address. And if there are situations where SumRando needs more, the firm does at least say it will never sell or trade your details to anyone else.

The SumRando webpage has only two download links, one for its Android app, the other for Windows. We grabbed the Windows build and watched it install without hassle.

On launch, the client prompts users to log in with their account details, or click an Anonymous Login button to try the service without handing over any personal information.

We chose the Anonymous option, and found the client added a five pixel-wide strip to the top of the screen. This is black and yellow when the VPN is off, and turns a reassuring shade of green when you're protected. It's a simple way to keep your VPN status in mind, whatever else you're doing, and can optionally be turned off if it ever gets in your way or otherwise irritates.

The rest of client is as basic as we've seen. There's no option to change or tweak protocol, no way to launch the app automatically, no kill switch, no DNS configuration, no special leak protection, nothing but a plain text list of location names and a Connect button, and that's it.

The underlying engine is a little more capable than this. Although there's no kill switch, when we forcibly killed the OpenVPN connection, the client immediately displayed a pop-up alert. That won't prevent data leaks, but it does at least give you a chance to close any at-risk apps yourself, which is more than we've seen with some VPNs.

Browsing performance was slow, with some sites taking so long to load we thought the browser might have locked up. Our actual speed tests gave more mixed and inconsistent results, with downloads hitting 15Mbps at an absolute momentary best, but sometimes plummeting to under 5Mbps immediately afterwards.

The client failed our DNS leak test, too, with IPLeak and other test sites showing we were still using our original ISP's DNS servers. This could be fixed, to a degree, by smarter OpenVPN configuration, but a default setup file dated March 2013 suggested SumRando won't be changing this any time soon.

It's hard to see why anyone would buy SumRando's horribly basic yet surprisingly expensive VPN. The free plan isn't great, either, but as you can try it without handing over your email, it is at least easy to try.