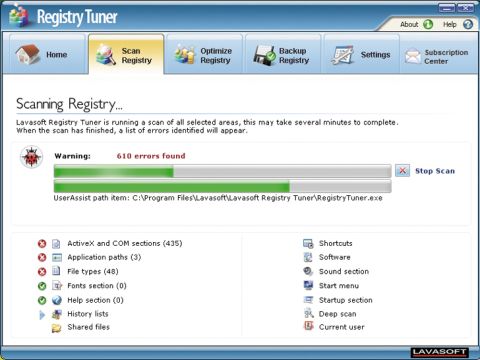 Scanning your Registry reveals the problems within

At the heart of your PC's Operating System lies the Registry - something that'll become increasingly bloated as you install or uninstall programs. With every such action, it's likely strings will remain in your Registry that don't relate to anything anymore. This is one of the factors that contributes to the feeling that your OS has become significantly slower since you started using it.

However, you shouldn't delve into your Registry unless you know exactly what you're doing - you run the risk of rendering your PC unbootable. Registry Tuner looks to automate this task for you, enabling you to optimise your Registry and scan it for potential problems.

Sporting an uncluttered and simple interface, Registry Tuner's main functions are easily found. Options are organised via tabs, offering a choice between scanning, fixing, optimising or backing up your Registry. Alternatively, selecting the "One Click Tuning" wizard goes through each in turn automatically, leaving you to sit back and let it work its magic, before rebooting your PC.

Our scan, as expected, revealed an alarming-looking number of problems within our Registry. Helpfully, Registry Tuner offers further investigation into these problems, placing them into categories such as Application paths, File types and Shared files. Interestingly, it took two scans and fixes before the PC was deemed totally fixed; on our second scan, 16 problems were revealed, compared to the thousand or so shown on the first.

Although it promises "deep Registry cleaning for powerful PC performance", we can't say that we found any noticeable increases in performance after fixing and optimising. Indeed, the majority of problems found in our Registry were strings relating to uninstalled programs, which would likely be typical of most Registries.

In this regard, Registry Tuner isn't likely to yield any kind of dramatic performance gains. However, should you be looking to clean the hard-to-reach parts of your PC without expending any effort then it's a decent investment.