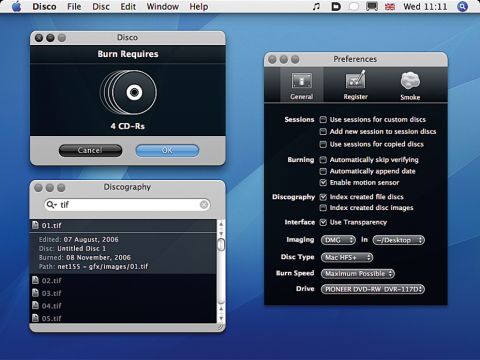 The reality is that Disco has some way to go: although offering novel features, it gets some of the basics wrong.

Disco would undoubtedly have walked away with an award if our verdict had been based solely on hype. The developer's shrewd marketing includes boasts that the application will toast Toast and be the "last media-burning app you'll ever need". The reality is that Disco has some way to go: although offering novel features, it gets some of the basics wrong, meaning many users will be better off sticking with freeware offerings Burn and LiquidCD.

The inflexible, non-standard interface is both Disco's most obvious differentiator and its biggest flaw. The transparent, smoke-coloured window makes the application easy to use and irritating to work with. The large, helpful icons are great, but the non-resizable window means you cannot give a disc a name longer than about 25 characters, and long lists of files rapidly become tiresome to navigate.

Also, you can't remove individual files from folders in the list, nor can you edit filenames. However, when it comes to burning media, the application performs well, offering user-friendly displays telling you what's occurring at any given time.

Disco offers two innovative features that aim to set it apart from its contemporaries: Discography and Spandex. The former is most successful and tracks every file on the discs you burn, and provides a Spotlight- esque interface to search them with. We'd like access to the entire directory of each disc, but that's a minor niggle.

Elsewhere, Spandex - a tool to automatically divide large burns across multiple discs - works less well. It can't split folders that are larger than the target media volume, and the way it organises items is sometimes wasteful - in one of our tests, just 900MB of data was spread across three CD-Rs. Still, Spandex shows promise, and the developer claims Disco will rapidly evolve and improve.