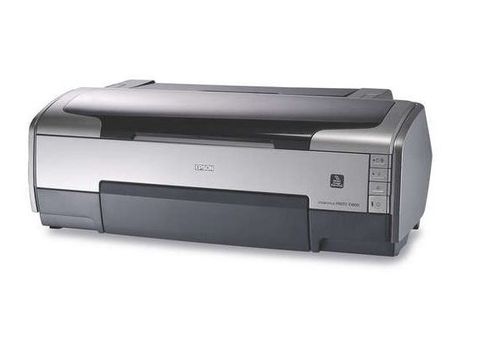 With more than a subtle clue in the model name, Epson's R1800 is basically a scaled-up version of its R800 printer, for A3 printing. Internet bargain-hunting aside, however, the R1800 is barely much more expensive than Canon's iP8500D A4 printer, making it an attractive proposition for digital camera owners who have 6Mp or more to play with.

The R1800 sports the same general lack of features as its smaller R800 counterpart, with no preview screen, card reader or even PictBridge support. Somehow, this is more acceptable on an A3 printer, as you're unlikely to chance straight-off-the-camera luck when committing to the expense of an A3 print. The Epson is an imposing beast as well, larger than the Canon i9950 and only slightly smaller than HP's supersized A3 model.

The quirky line-up of inks that forego light cyan and light magenta in favour of matte and gloss blacks, red and blue in the R1800's range enable immensely accurate colour rendition and tonal quality. As with the smaller R800, the most vivid and vibrant of colours are toned down a little compared with the equivalent Canon printers, but photo prints are still plenty lively enough in most cases.

Surprisingly, the R1800 proved a little slower than the R800 for 6x4-inch photo prints in our tests, but slightly quicker for A4 prints. For full A3 prints, the Epson took around five minutes, which is a bit longer than the Canon i9950 but well under half the time required by the HP 8750. Running costs were a less pleasant surprise, with ink cartridge costs working out to be slightly higher than with the HP, even though HP cartridges come complete with print heads. Overall, though, we'd still go for the Epson in preference to the HP, as the print quality is slightly better.