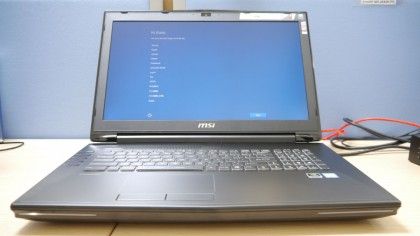 This is a compelling VR-ready performer thanks to the powerful Quadro M5500 GPU, and there's plenty to like, but it doesn't come cheap, and the relatively flimsy warranty is a worry.

Virtual reality is coming of age with hardware like the HTC Vive and Oculus Rift providing ideal devices for creative minds and gamers alike.

It doesn't come as a surprise therefore that at least one top-tier laptop vendor saw an opportunity to repackage its gaming products for a more lucrative audience: creative professionals.

That vendor, MSI, sent us the WT72 6QN, otherwise known as the first Nvidia VR-ready professional mobile workstation, one which was launched only a few months ago.

What sets it apart from its other siblings is the presence of a new GPU, the Quadro M5500, which has 2,048 CUDA cores and offers, according to Nvidia, a third more power compared to the previous generation. More on that later.

So, this is a gaming laptop that has had a brain swap to transform it into a professional workstation – which means that there are still a lot of small features that betray its original status.

Note that this laptop is not available for sale in the UK. The WT72 6QN costs a staggering $4,599 in the US and while you may be able to buy it from the States, the shipping costs and added taxes mean that you're looking at a £4,000 bill, at least (that's around AU$7,000).

Those who have dealt with large gaming laptops will recognise the form factor embraced by MSI. Let's cut to the chase: the WT72 6QN is not the Studio G3. It's big, blunt and boisterous, just like the Octane II Pro from PC Specialist which we reviewed recently.

It weighs a chunky 3.8kg and is 48mm at its thickest point, while its footprint is roughly equivalent to an A3 sheet. Add another 1kg for the power adaptor which is as heavy as the Apple MacBook.

The chassis is massive but a bit too 'plastic' for our taste. We can easily envision it becoming slippery with sweaty palms after a few hours. There are five keys on the left of the keyboard: Power, GPU toggle, Turbo Fan, Keyboard Lights and a programmable one.

The device's big selling point is the Quadro M5500 GPU from Nvidia and to date, it remains the only one shipping with this graphics solution. Since this is a professional chip, its drivers have been certified and optimised by ISVs such as Dassault Systemes, PTC, Autodesk and Adobe, which all but guarantees that there won't be any artefacts or discrepancies in final production pieces.

Its non-certified, consumer equivalent, is the Nvidia GeForce GTX 980M, which therefore shares a number of features with it. That includes the 2048 shader cores (clocked at 1.14GHz), 8GB of GDDR5 memory (clocked at 6.6GHz and delivering 211GBps of available bandwidth) and the Maxwell architecture.

Nvidia says that its power consumption tops 150W, which makes it more convenient for larger form factors (probably why MSI included it in a 17.3-inch laptop).

Sadly, MSI engineers didn't pair that chip with the fastest Intel CPU around – as PC Specialist did with the Octane II Pro – but there's a very good reason behind that.

MSI also offers the i7-6700HQ which has a lower base frequency (2.6GHz compared to 2.9GHz) and, unlike the 6920HQ, doesn't support vPro, TE technology and TSX-NI. Alternatively, another option is the Xeon E3-1505M v5 which is clocked at 2.8GHz and offers ECC memory support.

One thing that users of this laptop can't complain about is the sheer volume of ports and connectivity options, as having acres of real estate helps tremendously on this front.

So there are six USB 3.0 ports, one USB 3.1 Type-C port which doubles as a Thunderbolt 3, HDMI, Mini DP, a Killer-powered Gigabit Ethernet LAN, 802.11ac Wi-Fi and Bluetooth 4.1 (thanks to Intel), an SD card reader and a full set of audio connectors.

The model that was shipped to us incorporated 32GB of DDR4-2133 memory (expandable to 64GB), a full HD webcam, a Blu-ray drive, a 9-cell 84Whr battery, Windows 10 Pro and a pair of 3W speakers with an accompanying subwoofer, all driven by DynAudio technology.

Also under the hood were an HGST 1TB 7200rpm hard disk drive coupled with a pair of 128GB NVMe PCI-E Gen.3 x4 SSDs in RAID-0 setup, allowing this array to reach read speeds of 3,300MBps. You can add two more cards but we wonder whether RAID-1 might have been a better option since reliability is paramount on a workstation. The ability to run four SSDs also paves the way for RAID 0+1/1+0 as well.

The 17.3-inch display is available either with a full HD resolution or a 4K one, both in an IPS flavour and equipped with MSI's own True Colour Technology which, according to the vendor, delivers a near-100% sRGB gamut, a claim we haven't checked.

Ours came with the 4K screen and performed admirably during our short test, delivering punchy, vibrant colours with great viewing angles.

MSI's extensive experience in gaming peripherals also shone with the WT72. It borrows from the SteelSeries keyboard range with silver-lining print to reduce eye strain with three colour zones.

We found that rather distracting, but fortunately, you can switch it off. Since keyboards are often a matter of taste, let's just say that this one was a tad too soft/mushy for our liking with some strange key placements (e.g. Windows key on the right) but with a good return.

As for the touchpad, it suffers from one flaw. It doesn't have any physical borders – the palm rest and the surface of the touchpad are on the same level which makes false positives (i.e. when your palm accidentally causes the mouse cursor to move) a far more frequent occurrence.

We took the WT72 6QN for a short benchmarking ride using CPU-Z, Intel XTU (Extreme Tuning Utility) and Maxon Cinebench R15. Not surprisingly, this is a beast hitting 1995/8445 points for the first benchmark, 1090 marks for the second and 97.53fps/646GB on the last test.

One last note with regards to bundled software. MSI saw fit to throw in WinZip, Norton AV, CyberLink and Magix Suite, all of which seem to be coming straight from an early 2000s cover disc. Definitely not what one would expect to see on a four-grand laptop.

This is a massive workstation (although a lightweight affair compared to yesteryear's desktop replacement models) with an equally massive price tag. We're disappointed by the warranty which, standing at only 24 months, is far too short for a laptop costing that much.

This aspect is especially telling compared to established players like Dell, Lenovo or HP who have workstations that would score worse on the value-for-money front, but end up getting the sale because of the ability to provide far longer (up to five years) and more responsive aftersales service.

Still, despite the shortcomings, the WT72 6QN remains the only choice if VR is your priority. It remains the only workstation – at the time of writing – that comes with the Quadro M5500 GPU out of the box. That said, the warranty may well be the deal-breaker.