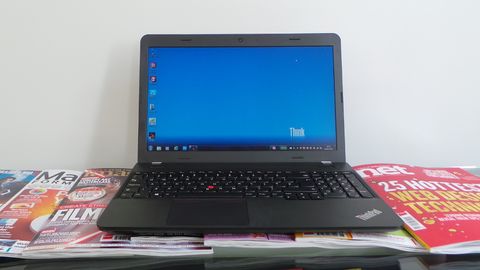 Forget the Essentials range, Lenovo has a winner on its hands with the ThinkPad E555, a laptop which bears all the qualities (well, almost) of the legendary ThinkPad family but without the price tag.

Lenovo purchased the ThinkPad product portfolio from IBM a decade ago and has maintained the brand ever since. The company refreshed the entry-level enterprise laptop range, the E-series, and dropped the Edge name from it. The latest addition to it, the ThinkPad E555, follows the path of its predecessor, rigorously sticking to the design guidelines of the ThinkPad family.

A word here to mention the fact that this particular model faces some stiff competition from one of its own, the Lenovo B50-30. The latter is geared towards small businesses and home users, aimed at "increasing productivity but without breaking the bank" according to Lenovo.

If you're used to lightweight laptops (Ultrabooks or Chromebook-type), handling the ThinkPad E555 comes as a shock and is a stark reminder of how massive traditional laptops (i.e. 15.6-inch models) used to be in the not-so-distant past.

It is heavier than most laptops of a similar size we've played with before and while the weight makes it reassuringly solid, it is not something we'd like to lug around regularly (e.g. as a commuting laptop).

As with most notebooks of this family, it features a discretely-etched Lenovo logo in one corner of the laptop and a prominent ThinkPad logo on the opposite corner of the smooth, anthracite rubberised cover – the red dot on the letter "i" of this logo lights up when the machine is on (there's an exact replica on the right edge of the palm rest).

As expected its girth is significant at just over 2.5cm – the E555 occupies a surface area of about 25.5 x 37.5cm weighing a solid 2.4Kg. The left hinge squeaks slightly when opening the cover, although ours might be a dodgy one.

Once opened, you get a sense of deja-vu that will please ThinkPad aficionado: the red lines, the logo, the curved keys, the 'nipple' in the middle of the keyboard and the depressed start button near the top, all of these are unmistakable signs of a ThinkPad machine.

The screen and the input peripherals are subjective matters; opting for a matte display means little reflection, fingerprints or dust speckles. The keyboard has a decent spring, no apparent flex and felt fairly soft thanks to the slightly curved design of the keys. The top row of keys has two functions and the numeric keypad is a welcome addition.

I never felt compelled to use the input contraption commonly known as the nipple, which Lenovo calls the TrackPoint style pointer. It makes my index finger numb after a while and is not as precise as the touchpad – it still reminds me of the good old trackballs from yesteryear but without the propensity to get all dirty.

Speaking of the touchpad, the one on the ThinkPad E555 is probably the only glaring weakness of this device. I like my clicks localised; i.e. clicking on one area doesn't depress the entire touchpad. It's an issue I've encountered both on cheap and upmarket laptops, but the one on the E555 is made worse by the hollow sound that accompanies every click.