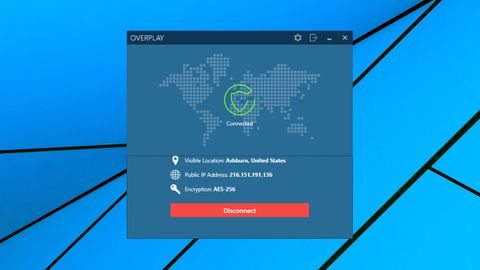 There are cheaper and more powerful VPNs around, but if you'll use OverPlay’s site unblocking SmartDNS then it might be worth checking out.

Perhaps best known for its site unblocking SmartDNS service, UK-based OverPlay also offers a premium SmartDNS+VPN package for $9.95 a month, falling to an equivalent of $8.33 if you pay for a year up-front.

That's a much higher price than most of the competition (subscribe for two or three years and even some top providers can charge under $3 a month), and the service specs are only average. 70+ locations in 50+ countries isn't bad, for instance, but there are just 650+ servers, and OverPlay supports only three simultaneous connections

If you're interested in site unblocking then you could try OverPlay's bundled SmartDNS system to see if it works for you. Essentially this involves applying new DNS settings to your device, then using a web console to set a custom location for every supported site (Netflix, Amazon Instant, Disney Channel, Hulu, Now TV, Zattoo and more.)

OverPlay's privacy policy is well laid out and contains a lot of information, but most of this relates to the website and billing. On the VPN side, there are only three very general bullet points:

"We do not collect or log any traffic or use of our SmartDNS or Virtual Private Network services.

We do not sell or share personal information about our users to third parties, under any circumstance.

In order to provide you with our Services, we need to collect an email address and a valid payment method."

That sounds good, but can you trust whether the company is doing what it promises? There's no way for anyone to tell. That's why we prefer the approach taken by companies like NordVPN and VyprVPN, where they've put their systems through a public audit to verify their no-logging credentials.

OverPlay has Windows and Mac clients, but nothing for Android or iOS. There are instructions on setting up the service manually, or via OpenVPN, though, as well as some guidance on configuring routers. The guides are relatively basic and can't begin to match the depth of documentation available with the top providers, but there's enough to get started.

Signing up for an account is easy enough, and once we'd handed over our cash, a web console seemed to offer us links to setup instructions for Windows, Mac, Android and iOS. Unfortunately, they were all broken, and gave us 'page doesn't exist' errors.

Eventually, we found, downloaded and launched the installer ourselves. A warning message that 'Visual C++ Redistributable for Visual Studio 2013... was not correctly installed' wasn't exactly encouraging, but we told the installer to ignore it, and this didn't seem to cause any issues.

The Windows client is simple, automatically identifying your nearest location and allowing you to connect with a click.

A location list displays country and city names, server loads and ping times. There's a search box to speed up the process of finding locations, but no Favorites system to group your most commonly used servers.

The Settings panel enables choosing the protocol (OpenVPN TCP or UDP), and enabling the kill switch, DNS and IPv6 leak protection. A particularly handy Startup option enables connecting to the last server, the fastest server, or the fastest server in a given country when the client launches.

In our tests, the kill switch worked almost exactly as it should. We forcibly closed the OpenVPN process, but the client noticed immediately and reconnected within a few seconds, without ever allowing our real IP address to leak. We would have liked the client to use a desktop notification as an alert to what was happening, but that's a relatively small point. OverPlay protected our identity, and that's the highest priority.

Website unblocking performance was good. OverPlay got us into BBC iPlayer with one of its UK servers, unblocked US YouTube without difficulty, and even enabled streaming US-only Netflix content.

Download speeds were more disappointing. UK servers averaged around 25-30Mbps, less than half of the performance we expect from most VPNs. US speeds were better, though, peaking at 40Mbps, and that should be enough for most purposes.

OverPlay is a little expensive, but performance is above average, you get plenty of locations to choose from, and there's a no-strings money-back guarantee. If you'll make use of SmartDNS this package could be a smart choice.