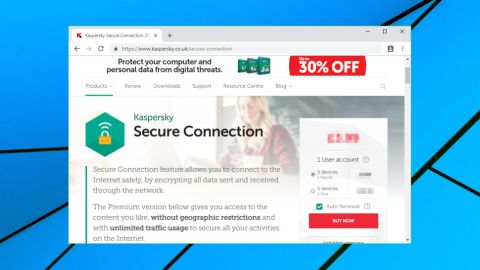 Kaspersky’s offering is fast and good value if you only need the VPN basics, but power users will be frustrated by the lack of features.

Kaspersky Secure Connection is a low-cost, easy-to-use and torrent-friendly VPN service aimed at home users and the networking novice.

This focus on non-technical users became obvious from the moment we first looked at the website. It contains almost no details on the number of countries or locations available, the supported protocols, DNS issues, kill switches or anything faintly low-level.

Although one reason for this could be that there's not a lot to talk about. Secure Connection is powered by Hotspot Shield, and offers only 18 locations spread around the world (Europe, US, Hong Kong, Japan, Mexico, Russia, Singapore). There are a few welcome features, the best being the ability to automatically connect when you access insecure or untrusted wireless networks, but for the most part, Kaspersky keeps options to an absolute minimum.

This does make the apps supremely user-friendly, though, and with downloads available for Windows, Mac, iOS and Android, you can have most devices protected at speed and with the minimum of hassle. (Unfortunately, there's no way to set up the service manually, on a router, Chromebook or anything else – you can only access Secure Connection from the official apps.)

Kaspersky Secure Connection has an extremely limited free plan where you can't choose your location and are restricted to 200MB of traffic a day (300MB if you register, or you already have a My Kaspersky account).

This isn't quite as bad as it sounds. Even that 200MB per day translates to around 6GB a month without requiring handing over any personal data. But such a low daily limit means you'll struggle if you want to download or stream very much, and if you're willing to hand over your email address, there are better offers around (Windscribe's free account gives you 2GB a month, but rises to 10GB if you register).

Fortunately, the picture improves significantly if you sign up for a paid monthly account. This gets you unlimited data use, full access to all locations and support for up to five simultaneous connections, all for the very low price of $4.99. Buying a monthly account direct from Hotspot Shield costs $12.99.

Pay for a year upfront – card or PayPal supported – and the price plummets to an effective $2.50 a month. Again, that's much cheaper than going direct to Hotspot Shield, where the annual plan costs $5.99 a month, and even the three-year plan costs $2.99. Hotspot Shield's clients have more power and features, but Kaspersky Secure Connection gives you access to some of the same locations, and all the same performance, for a fraction of the price.

It's always difficult to know whether you should trust any VPN provider with your privacy, and this is especially true with Kaspersky. The September 2017 announcement that the US government would be banning the use of Kaspersky software on sensitive government systems (Pentagon, GSA, NASA) didn't inspire confidence - so worth checking out the best US VPN to use in the USA.

We've yet to see any evidence that Kaspersky has done anything wrong, though, and the main focus of the concern seems to be Kaspersky's antivirus software. Kaspersky Secure Connection doesn't have the same kind of access to files, and the company doesn't control the underlying VPN network, either: it's powered by the California-based Hotspot Shield.

Should you be concerned? We can't say for sure, but as there's currently no sign of wrongdoing on Kaspersky's part we're not going to allow these issues to influence our review.

We're more interested in Kaspersky's logging policy, but the website barely mentions the issue beyond a single line on the front page: "Kaspersky Secure Connection won't log what you're doing online and won't keep any records of which websites you visit."

While that sounds definitive, it's not the whole story. Although Kaspersky says it doesn't track where you're going online, as with many services, it records plenty of information about your connection sessions.

Some of this is very normal. The service supports five devices, for instance, so we know it must be tracking connections and associating them with an account. And it has a bandwidth-limited free account, which tells us it can record the amount of data used in individual sessions.

Other elements are more surprising. Use Secure Connection for a while, then view the Statistics page in your My Kaspersky portal, and you'll find a record of your VPN sessions so far: the start time, end time, and the VPN server you accessed, and the bandwidth used per day. This updates in real-time, too. If someone can get access to your My Kaspersky portal, and view the Statistics page, they'll see any Secure Connection server you're using at that moment.

Session logging isn't unusual, and doesn't necessarily mean others can link an online action to your account (this would also require records of outgoing IP addresses, for instance). Still, we'd like to have a more detailed explanation of what the service is doing, to allow potential customers to make up their own minds.

Getting hold of the free Kaspersky Secure Connection edition is straightforward. The package comes bundled with some Kaspersky products, or you can grab clients for Windows, Mac, iOS and Android from the Kaspersky site.

The Windows app is compact, and has a simple, straightforward interface. By default, it selects a server automatically, and you can connect and disconnect with a click. Upgrade to the commercial version and you can choose one of the 18 available locations from a list, and mark some of these as favorites for speedy access later.

Switching servers is easy. Unlike some clients, you don't have to close the current connection before opening a new one. Just double-click the new location and the package connects to it right away.

A Settings dialog enables configuring the app to connect when it first launches, and allows setting up very flexible rules for what to do when you connect to an insecure wireless network. You can have the app enable the VPN automatically, ask you what to do, or just connect as usual, for instance. And rules are stored per network, so you can have the VPN turn itself on for networks which might be unsafe, and leave it off for others.

The Windows client doesn't have a configurable kill switch to block internet access if the VPN connection drops, and a Known Issues support document explains that Kaspersky Secure Connection won't protect your data during at least some interruptions in the secure connection (when you change servers, or network connections).

Features can sometimes vary between platforms, but checking Kaspersky's Android app revealed only a few small usability differences (the 'Select automatically' option tells you which location you've accessed on the desktop, but doesn't on Android). Otherwise it's essentially the same as the Windows client: a simple and stripped-back VPN app with minimal features and functionality.

We began our performance tests by using Ookla's SpeedTest and Netflix' Fast to check download speeds from Secure Connections' closest UK server. The 50-55Mbps results weren't the best we've seen, but unless you're doing some very heavy downloading, you're unlikely to notice any issues.

We moved on to check the speeds of European countries and US connections, before going long-distance to locations including Singapore and Hong Kong. These results normally vary considerably, but, oddly, Secure Connection averaged 50Mbps almost everywhere, with only Singapore falling marginally behind at 40-45Mbps.

This was so unusual, we had to spend some time checking our figures. Was our local connection throttling Secure Connection's speeds? No – repeating the tests with the VPN off gave us the usual 70Mbps for our 75Mbps test line. Was this a temporary network issue? Measuring speeds 24 hours later returned the same results. Was it a problem with our chosen speed test sites? Others gave very similar figures, and if we tried them with another VPN, the usual variation in speed returned.

Our best guess at an explanation is there's some form of traffic management going on, maybe limiting top speeds to better share out bandwidth between Kaspersky's users.

Whatever our issues with these peak speeds, what we can say for sure is the lowest speeds were excellent at around 40Mbps. If you're more interested in reliability than having the fastest possible downloads, Secure Connection should appeal.

The Kaspersky website sells Secure Connection more on its privacy and security features than any site or service unblocking abilities. There's a line explaining that it "lets you access more sites and content", but there's no mention of Netflix or any other site you might particularly want to view.

We began some simple checks of our own by logging into Kaspersky's UK server and trying to access BBC iPlayer. No luck, unfortunately – the site told us its streaming content wasn't available from our location.

Better still, we were also able to browse and view US Netflix content without difficulty.

This situation can change quickly as content providers update their software to block more IPs, and VPNs change their systems to regain access. At the time of writing, though, Kaspersky Secure Connection delivers decent unblocking performance for a very reasonable price.

Kaspersky Secure Connection's apps are so simple that you'll probably master them in about five minutes. If you do run into problems, though, a Help link on the app menu will take you to a web manual. It's not a very good manual – it spreads a very tiny amount of information over far too many pages – but we're still happy it's there.

A basic knowledgebase is on hand for more general questions. What you get is clear enough, but there isn't anything like the level of troubleshooting advice you'll benefit from with most VPN providers. Search for 'speed' in the average VPN knowledgebase and you'll get all kinds of useful advice. Do the same with Secure Connection and you get a single article telling you the app runs on a 'Processor with a clock speed of 1GHz or higher.'

Kaspersky's user forum was another way to try and get help on more complicated issues. This rarely worked – there were only two or three questions a week, and answers came from other users, not Kaspersky employees – so we were intrigued to hear that Kaspersky had launched a community portal with its own moderators.

This new resource is almost as quiet as the old forum, but questions seem to be answered on the same day by Kaspersky staff, a definite improvement. If you want to discuss a general Secure Connection issue, maybe with other users, it could be worth a try.

If all else fails, you can contact support via tickets, telephone or live chat. Tickets are available 24/7, but telephone and live chat hours vary between countries (UK is business hours during weekdays, for instance, while US users are covered seven days a week, 7am to 1am). The website makes this more complicated to access than it needs to be, but it's good to have this support available if you want it.

Fast, cheap, and easy-to-use, Kaspersky Secure Connection could be a sensible choice for novice users with basic security needs. But more experienced types looking for features and configurability might be better off looking elsewhere.