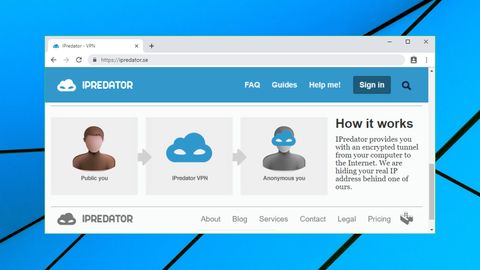 IPredator did well in our speed tests, but there's just not enough power here to justify picking this VPN ahead of the competition.

IPredator is a Swedish VPN co-founded back in 2009 by The Pirate Bay's Peter Sunde.

If you're interested in bypassing geographic blocking, this won't be the service for you. IPredator claims to have more than 100 servers, but they're all in just one country: Sweden.

That's still enough to maintain your anonymity, though, and the company offers several more interesting privacy extras: a public Jabber instance, a custom anonymous email service, a non-logging web proxy, uncensored DNS servers, a Tor server running as an exit node, and even a private IRC server to get some speedy support.

The service supports OpenVPN and PPTP protocols on up to two simultaneous connections, there's an IPv6 connectivity, and you can sign up for a static IPv4/IPv6 address, if you prefer.

IPredator doesn't have its own apps, but OpenVPN-compatibility means you can set up the service on Windows, Mac, iOS, Android and multiple other devices and platforms (browse the web-based tutorials to find out more.)

Prices seem reasonable at $8 for a single month, but there are no discounts for signing up to the 3, 6- or 12-month plans.

You can also get a 3-day trial. This isn't an automatic part of the signup process – you must email support and ask – but that's a minor hassle. So few providers offer trials these days, we'll take whatever we can get.

IPredator's website has a neat headline which combines its monitoring policy and reason for existence: "Big Brother is watching YOU. We are not."

The core details are summed up elsewhere. The company doesn't log or ‘look into’ your traffic. There's a session log to manage connections, but that only contains basic details - user name, your server, no real IP address – and even then, the system deletes those when the session closes.

There are some connection logs to help with debugging – connection drops, firewall issues, authentication failures (such as logging in with the wrong password) – but not enough to tell anyone anything about what you're doing online, and even these details are held encrypted and off-site.

IPredator keeps the bare minimum of details on individual users: your email address, username and password. There is a separate database which holds a link to a transaction ID for the payment processor, which must be kept to deal with complaints or questions, but this is deleted in "a bit over 6 months".

Even these details will only be handed over if the Swedish authorities can make a case that they're related to serious crime, where someone will eventually be imprisoned (murder, major fraud).

There are a few other interesting privacy-related features we noticed elsewhere. IPredator says it doesn’t have an affiliate program, for instance, because that would mean it would have to track where you came from to pay the affiliate. A thoughtful objection which we've not seen elsewhere.

IPredator has no clients of its own, and although there are setup tutorials available for Windows, Mac, Linux, Android and iOS, they're really not aimed at beginners. The guides don't explicitly spell out every step, and the information you do get can be very technical.

For example, a step on saving your OpenVPN credentials warns that there's no hashing and you might want to use an encrypted container, not points that privacy newbies will necessarily understand.

Launching the Windows OpenVPN tutorial and seeing ‘Step 1 of 33’ might be intimidating, too, although it's not as bad as it seems. Almost every click is a separate step (click Agree, click Next...), and it fits in some helpful configuration advice towards the end.

Life gets considerably easier when you're up-and-running. With only one location (Sweden) there's no need to choose or change anything – just choose Connect to start, and Disconnect when you're done.

As iPredator has no apps, our regular kill switch and leak tests aren't relevant. (The results you'll see will largely depend on the OpenVPN client you use.)

IPredator's Sweden-only location list meant we couldn't run our usual unblocking tests, either. We tried logging in to Netflix via iPredator, regardless, but were presented with Netflix' usual 'you seem to be using an unblocker or proxy' error message.

We couldn't fault performance, though, with our servers hitting a consistently speed 64-68Mbps. That's good news, but keep in mind that you might see reduced performance if you're a long way from iPredator's Swedish base.

IPredator is a speedy VPN with some unusual extras, but they can't compensate for the single location and the total lack of apps. The service could still be worth a try for experienced users looking for a short-term contract with a Swedish VPN, but everyone else should look elsewhere.