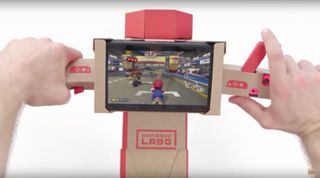 A free software update for Mario Kart 8 Deluxe has made the racing game compatible with Nintendo Labo, the cardboard Switch accessory kit released earlier this year.

Players are now able to select the Labo’s Toy-Con Motorbike controller on the game’s main menu, either playing on their Switch in TV mode or inserting the console directly into the Motorbike dashboard for racing on the move.

Nintendo Labo is one of the quirker peripherals currently available for the Switch.

While the Labo boasts a number of DIY creations such as fishing rods, giant robot suits and a makeshift piano, the Toy-Con Motorbike clearly has the most potential for use across other titles.

Mario Kart 8 Deluxe is the first Nintendo game to get compatibility with Labo’s ‘hardware’, although Nintendo has said more titles will follow – and we can’t imagine it not adding Labo support for Team Sonic Racing when that launches later in the year.