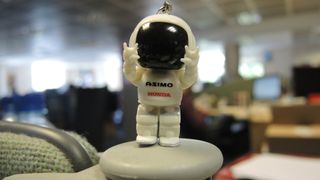 Roboticists at the Rensselaer Polytechnic Institute in New York have built a trio of robots that were put through the classic 'wise men puzzle' test of self-awareness - and one of them passed.

In the puzzle, a fictional king is choosing a new advisor and gathers the three wisest people in the land. He promises the contest will be fair, then puts either a blue or white hat on each of their heads and tells them all that the first person to stand up and correctly deduce the colour of their own hat will become his new advisor.

Selmer Bringsjord set up a similar situation for the three robots - two were prevented from talking, then all three were asked which one was still able to speak. All attempt to say "I don't know", but only one succeeds - and when it hears its own voice, it understands that it was not silenced, saying "Sorry, I know now!"

However, as we can assume that all three robots were coded the same, technically, all three have passed this self-awareness test.

It might sound a pretty simple task for a human, but it's not for a robot - the bot must listen to and understand the question, then hear their own voice saying "I don't know" and recognise it as distinct from another robot's voice, then connect that with the original question to conclude that they hadn't been silenced.

Logical puzzles requiring an element of self-awareness like this are essential in building robots that can understand their role in society. By passing many tests of this type, it's hoped that robots will be able to build up a group of human-like abilities that become useful when combined.

Bringsjord's work will be presented at the RO-MAN conference in Japan, which runs from 31 August to 4 September 2015. Oh, you want the correct answer for the wise men puzzle? Well, the only fair contest would be if they were all the same colour!