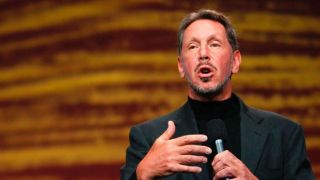 Oracle Founder and CEO Larry Ellison earned $78.4 million in 2013 and was the highest-paid CEO among the 100 largest U.S. publicly-traded companies, according to a report commissioned by The New York Times and conducted by Equilar Data.

Despite a compensation decrease of approximately $18 million from 2012, Ellison retains his position atop the annual list. He has ranked among the top three highest-paid CEOs listed in the report for the past seven years.

The Redwood-Calif.-based company missed sales projections in 2013, despite increased profit, due in part to missed software license sales and cloud subscriptions. Oracle reported earnings of $17.6 billion on $37.2 billion in revenue.

Ellison is rumored to be worth approximately $48.2 billion.

Cisco CEO John Chambers ranks 11th on the list at $21 million in compensation. HP's CEO Margaret Whitman ranks 30th at $17.6 million. The lowest-paid CEO on the list is Larry Page at Google with $1 in 2013 compensation.

To measure CEO compensation, The New York Times commissioned Equilar to compile and analyze pay data from corporate filings. Data includes information for the chief executives at the 100 largest publicly traded companies as measured by revenue.