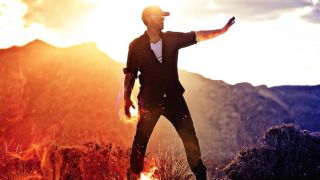 Sure, the Apple Watch may have many wonderful features of its own, but one thing definitely missing from the spec sheet is the ability to throw fireballs.

Don't worry though – a new wearable device called Pyro from magic trick company Ellusionist and magician Adam Wilber is hoping to turn anyone into a Hadouken-flinging fireball master.

Resembling a wrist watch, Pyro allows the wearer to remotely shoot up to four fireballs at a distance of around three metres before needing a quick reload of flash paper.

Don't worry - your eyebrows will grow back

The device seems to be aimed at budding illusionists, but we know that you'll probably want it for the next time you have to throw down with Zangief.

The initial shipment of Pyro wristbands sold out immediately, but Ellusionist's website will have more devices on sale from December 17th at a price of US$174.

Ellusionist stresses that the device is "not a toy", but rather a "badass professional device", so it's probably best that you don't give it to little Billy for Christmas this year.