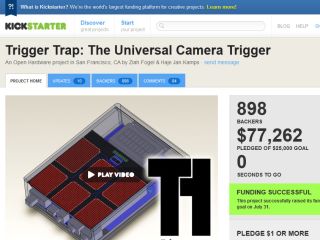 Haje Van Kamps has received over $77,000 for the TriggerTrap project

TriggerTrap finally gets the funding it needs to go into production.

Back in June, it was reported that Haje Jan Kamps of Photocritic was developing the universal Trigger Trap, but needed funding in order to start production.

Since then, a huge $77,262 from 898 backers has been raised for the project through Kickstarter, a funding website. Originally, the project goal had been just $25,000, which was acheived at the end of July.

Several incentives were given to people to donate more, ranging from "sincerest thanks" to those who donated $1, to a Canon DSLR camera, 50mm lens, books, a t-shirt, and of course some trigger traps, for anyone donating $1,999 or more. Now, Van Kamps has announced that the device has gone into production.

The TriggerTrap, which has been designed to used for time-lapse and hands-free photography, enables users to trigger their camera's shutter in an almost unlimited number of ways. It can be used with any camera thanks to a universal adapter and can be configured via radio signal, laser beam, by sound or by using a timer - among other methods.

Users are also actively encouraged to dream up new and inventive ways to trigger the camera using the device.

Now that all the donations are in, the TriggerTrap will begin shipping in February 2012, costing around $125.