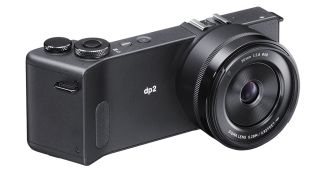 Sigma has introduced a new compact camera with an unusual design. The Sigma dp incorporates a Foveon X3 direct image sensor, which has been dubbed "Quattro".

Sigma has redesigned every aspect of the new camera including sensor, engine, lens and body. The aesthetics of the camera are pretty unusual, featuring a pronounced grip and a protruding lens.

The dp series comprises three fixed focal length cameras, each of which features a different focal length. First off, the wide-angle dp1 Quattro at 19mm, the standard dp2 Quattro at 30mm and the medium telephoto dp3 Quattro at 50mm. As the camera features an APS-C sensor, the equivalent focal lengths are 28mm, 45mm and 75mm respectively).

The Foveon direct image sensor is similar to traditional color film in that it uses multiple layers to capture all of the information visible light transmits, which Sigma claims produces increased resolution, precise gradation and excellent colors.

Because of the triple design layer of the 13 million pixel sensor, Sigma claims it is equivalent to a 39 million pixel device. It is joined by a TRUE (Three-layer Responsive Ultimate Engine) III.

Pricing for the Sigma dp Quattro range has yet to be announced, as has availability.