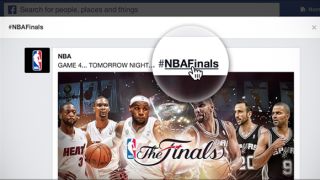 Everything you can do, Facebook can do the exact same

Adults always warned children of peer pressure, and the perils of doing what everyone else was doing for the sake of fitting in and not being a social outcast.

Apparently Facebook doesn't much care for sage advice, as the social network has finally succumbed to waves of users tagging status updates with hashtags, even though Facebook didn't support them.

While it certainly took long enough, it's not all that surprising given just how many people post the same comments across multiple social networks, hashtags and all.

By clicking on a hashtag, you'll see a news feed that allows you to see what other people are saying about the very topic that's been tagged.

You'll be able to search for tags through the search bar, open up hashtags from other services like Instagram directly from your feed, and even post directly to the hashtag feed once you're there.

It's literally the same feature you've been using across other hashtag-compatible networks, only now, it's on Facebook, too.

Of course, this is only the first part of a new wave of features Facebook is rolling out to help you find what others are saying in public conversations.

The network's future plans include trending hashtags (can you hashtag a hashtag?), which should serve to guide you towards more of the world's conversations without ever having to leave the friendly confines of Facebook.

At least now when your co-worker posts, "#caseofthemondays" on Facebook, it will serve as more than just a reminder about how clueless he is on the web, but that won't make it any less annoying.