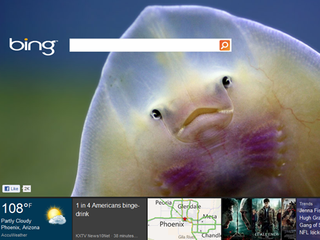 Bing - brings out the tiling

Microsoft has made some changes to Bing's homepage, adding Live Tile functionality to the bottom of the screen.

These Live Tiles are said to be in a similar vein to Bing for the iPad and offer up information on the weather and select news blogs.

If there is one thing that Bing trumps Google in, it is the looks department. The changing daily image has many fans (alongside its hidden trivia) and one of the best things about Bing for iPad is the Live Tile functionality.

From Windows to Tiles

Microsoft hasn't officially announced the arrival of Live Tiles to Bing but Within Windows has posted a workaround to get the new search page if you are desperate to see the new functionality.

The update is all part of Metro, which is a codename for Microsoft's cosmetic changes to a number of its sites, including Windows Phone 7, Windows 8 and Xbox 360.

The Live Tile rollout doesn't seem to have hit the UK yet, but it looks as if this will be a global change to Bing.