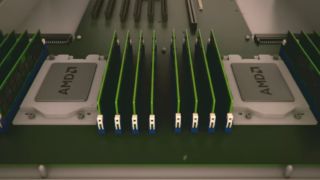 As you may be aware, AMD followed up its consumer-targeted Ryzen processors with Epyc CPUs (previously codenamed Naples) aimed at servers and data centres – and Intel has been busy slinging mud at the latter chips.

In a presentation slide, Intel claims that Epyc processors (which are based on the same Zen architecture as Ryzen, but go up to a mighty 32-cores) are ‘glued-together’ and a ‘repurposed desktop product for server’.

Basically, Intel is saying this is a cobbled together product, along with the glue comment, references the fact that AMD’s chips aren’t a single die, rather they are comprised of four dies put together. However, this isn’t a bad design, as Tech PowerUp, observes.

Indeed, the tech site argues that Zen cores were built from the ground-up for modularity and scalability, and to craftily maximise yields for AMD – with the Epyc chips also delivering impressive results on the power/performance front.

Intel’s slide, however, engages in other seemingly low blows, accusing AMD’s processors of having ‘inconsistent performance’ due to this ‘glued-together’ nature, and further accuses its rival of lacking in terms of its supporting ecosystem.

The problem is that making criticisms like these, with broad brush strokes such as vague accusations of inconsistency – as opposed to detailed comparisons or benchmark breakdowns – doesn’t really present Intel in a good light.

Particularly when in another slide, Intel further has a pop at Epyc CPUs by bringing up Ryzen’s initial problems with optimisation for games, and notes that buyers should expect similar software optimisations to be required for the server chips.

Which simply doesn’t follow. Exactly what does tweaking Ryzen for performance with specific games (perhaps at certain resolutions) have to do with what enterprise customers can expect from Epyc? Again, it just looks like a broad smear tactic. ‘This happened here, so it’s bound to happen again somehow…’

And this sort of marketing simply makes Intel look worried about the turf it might lose to AMD with these new Zen chips. After all, it appears that Ryzen is already making some considerable inroads into Intel territory with desktop PCs – albeit in terms of enthusiast rigs as these figures indicated earlier this month.

Intel may just have shot itself in the foot here – with a glue gun, if we can indulge in a bit of poetic licence, leaving the firm in a somewhat sticky situation regarding the tone of its marketing. It’ll certainly be interesting to see if AMD has any response.