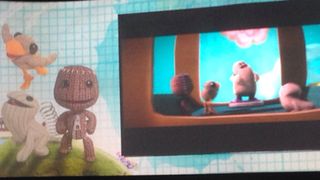 LBP 3 is coming with new characters

Announced at the Sony E3 2014 press conference, the LittleBigPlanet 3 release date is currently slated for November, which will be just in time for the holidays.

Oddsock can wall jump his way through levels and is much faster than Sackboy. To that point, he can use his super speed to help power objects in the LBP3 world.

Toggle contrasts by being the biggest of Sackboy's new friends. Naturally that also means he's the strongest, pushing heavy blocks. But don't judge a book by its cover. With the tap of a button, Toggle can become small and fit through tiny gaps that normal-sized characters cannot.

Finally, Swoop is a new bird character that can fly. He can lift up platforms from above so other players can pass through obstacles.

Sackboy isn't worn out, but if we're going to have a LittleBigPlanet 3, the new characters are a welcomed addition.