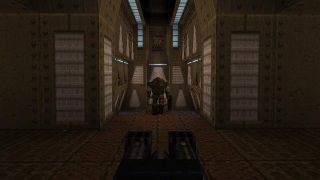 In celebration of the game's 20 year anniversary, Machine Games has released an entirely new episode of Quake.

Machine Games is the developer behind the excellent Wolfenstein reboot The New Order. Wolfenstein is another classic series which originated alongside Quake from id software.

Quake's active modding community means that a steady stream of content has been produced for the game over the last 20 years, but this a rarity in that it comes from an existing professional development studio.

This is not the first time new levels have been added to an id software game decades after its original release.

In 2010, when Doom 2 was ported to Xbox Live Arcade, the developer of the port Nerve Software created eight original levels for the fifteen year old game.

If you're interested in playing the new content you can download them from Machine Game's official Twitter page, but be warned - you'll need a copy of the original Quake too, which can be purchased from Steam.