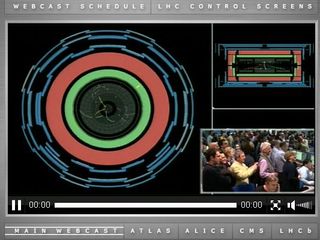 LHC - up and running

The Large Hadron Collider has seen collisions for the first time, ushering in a new era for particle physics.

Despite a problem with unstable proton beams, the first collisions were recorded at ATLAS just after midday.

Beams were declared stable within twenty minutes amid joyous scenes at CERN in Switzerland.

Followed by: "Experiments are collecting their first physics data - historic moment here! Watch the webcast, look at the photos - all live!

Director for Accelerators Dr Steve Myers said: "We have finally got the beams into collision. It's a great time for us and the first real milestone for starting to do discovery physics in the LHC.

"It's taken three attempts to get started this morning but we are now in collision, now in stable beams and the detectors are taking data continuously."

Now the real work begins for the scientists, as they plough through reams of data and try to pluck out evidence of things previously only theorised about.

That includes the so-called 'God Particle' or Higgs boson, although it is expected that evidence of super-symmetry (every particle having a partner) will arrive sooner.