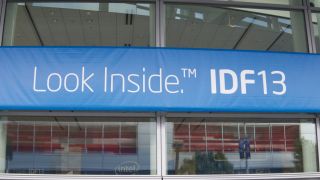 IDF 2013 is a wrap. While it may not have been the year's most breathtaking tech event, there were plenty of next-gen products and announcements that have us excited to see what Intel and its partners are planning for the next part of 2013 and beyond.

Windows 8.1 was a major theme of the show, as was Intel's new line of Atom processors, formerly known as Bay Trail. We didn't hear about Intel TV, but there was news from Google and wearables.

We learned motion-tracking laptops are coming from Asus, Dell, HP and Lenovo next year, plus got to go hands on with new products from those same manufacturers.

Intel focused on its bread and butter, hammering home the message that it plans to deliver more power with less battery drain in products for the short and long term. It's a strong stance but Intel's biggest challenge will be insuring its processors end up in products consumers want.

But, we're getting ahead of ourselves. Let's look back at our top moments from IDF 2013.

Bay Trail became official during IDF. The Atom Z3000 series for tablets sports 22nm silicon and supports Windows 8 and Android. We were eagerly anticipating seeing Bay Trail at IDF, and not only were our hopes realized, we got the chance to put the new Atoms through the ringer.

Tooling around with a reference design tablet that housed a 2560 x 1440 screen and Windows 8.1, we found the Z3770 ran a solid 1.46GHz. Though less than the previous gen 1.8GHz Atom Z2760, it still delivered twice the performance.

The pep and power only got better in other benchmarks, and now all we have to do is wait eagerly for the first devices running Bay Trail to hit the market. That won't happen until at least the full roll out of Windows 8.1, so unfortunately, more waiting is in the cards.

Intel has made no secret of its interest in wearables, and at IDF we met its smallest architecture yet, called Quark.

Quark SoC architecture is designed for products ranging from wearables to the "internet of things," and should help Intel break into the world of tiny tech. It still needs partners, but Quark shows the company is serious about this sector and willing to invest in what is sure to be a booming "ultra-mobile" market.

We have to temper our excitement of DDR4 somewhat because it likely will be at least two more years before we see the next-gen of performance memory in our desktops but to tell you the truth, it looks like DDR4 will be worth the wait.

We got the chance to hear much about DDR4 at IDF, and while patience is a must, the fact that we can look forward to better performance memory is tantalizing.

"For DDR4 it's the next step up in speed and it also requires less power," a Kingston Technology representative told us. "DDR4 starts at 1.2 volt, so right off there you're seeing anywhere between 15%-20% savings on power consumption. So for the consumer, that's more battery life, better cooling and better performance."

4. Chrome and Haswell, together at last

Google and its OEMs carried a few new Chromebooks and a Chromebox to IDF, equipping the new devices with 4th gen Intel Core processors. The devices from HP, Acer, Asus and Toshiba (the last two are first time Chrome-makers) promise better battery life and improved performance, and they look sleek and up to the task.

We'll need to spend time with the devices to get a good read on whether Haswell and Chrome can deliver the goods together, but the potential is definitely there. We are light on details like pricing, though HP's Chromebook 14 will cost $299 (about £188, AU$320).

With the products due, we'll see the Chromebook family grow and Haswell expand beyond Windows. It's good news all around.

5. Hands on with promising products

It's always great to go to a conference and have plenty of news to cover and hands on reviews to do. We weren't disappointed as there were just the right amount of devices to keep our hands happy.

We got to check out the return of "Venue" to the Dell line, this time not as a phone but as a Windows 8.1, 8-inch tablet. The Dell Venue 8 pro is by no means perfect, but it's affordable. We'll know more about the Venue in October, too.

Intel made much of its hope for convertibles, and we got to take one, the Transformer Book T100, to task in an hands on. This too is an affordable machine but even more importantly the Asus 2-in-1 has the goods to score big with consumers. It was a strong showing from both Intel and Asus.

We also tinkered with the ThinkPad T400 and ThinkPad T400s from Lenovo, which launched a number of products during IDF. The potential is definitely there in Lenovo's lineup. We'll just need some full review time to make a final call.

All in all, it was a strong showing for Intel-housing hardware at IDF. We should be in for some exciting fall releases.