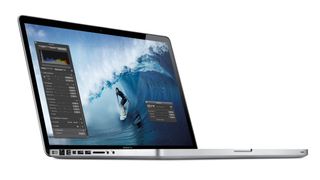 The presence of a Retina Display on the anticipated MacBook Pro refresh has been as good as confirmed by Folderwatch, a tool in the Mac App Store which has been updated to include "Retina graphics".

In the run-up to WWDC 2012 next week, the web is ablaze with rumours about what hardware updates could be announced.

Chief among them is that 2012 MacBook Pros and Airs will be sporting a high-resolution Retina Display as seen in smaller form on the iPad and iPhone.

Considering that app updates have to be approved by Apple and that Folderwatch has been an Apple Staff Favourite, it's not hard to imagine that Apple has been readying developers ahead of the release of Retina Display-equipped Macs.

This latest development flies in the face of an alleged leaked spec sheet for the new 13-inch MacBook Pro which showed the same 1280x800 resolution display as the current model.

For all the latest, check out Tech Radar's 2012 MacBook Pro news and rumours roundup and find out why the Retina Display is such a big deal.