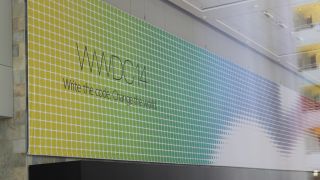 Is that an iWatch we spy? No.

Ahh, the smell of OS updates is in the air! Must be WWDC 2014 day, the day when Apple makes all our dreams come true by changing the font on the Calendar app slightly and trying to make us all sign up to bigger iCloud accounts.

That's right, it's keynote time: and what are we expecting to hear from Apple today? We'll be honest, it's a mixed bag.

11.56 - He's summing up about platforms and integration now. This doesn't sound like he's building to anything.

Here you go - info on the devices coming. So it's no luck if you're on an iPhone 4... but if you are, then just give in and buy a new phone. You'll feel a lot happier, promise.

11.54 - The way Health is glossed over makes me think that there's no iWatch. But, here's a good piece of news: iOS 8 is coming soon and will run on loads of devices - but the slide with the ones on was really quickly shown. Definitely iPad mini on there, FYI. (The only one I saw at the bottom).

11.53 - If you're into this, all this is in a book in iBooks - and when iOS and OS X Yosemite go live, you can submit apps straight away.

11.51 - The blimp is rising and falling because of a copy and paste. I feel like that should mean something. I'm guessing that blimp-fans are going to love this feature.

Wait, that last one was a picture of a blimp. I got that.

11.45 - What does this mean for the end user? Apple has just made a lot of developers very happy with lots of new, modern features (and secure) and make it all a lot slicker and easy to do.

So new apps will be less bug-filled (in theory), less heavy and even making them will be a little more accessible to the average user.

Even older apps will benefit, so this is all good for you if you're thinking of waiting for an iPhone 6 or iPad Air 2.

11.44 - It's getting a lot more technical now. Take this away though: casual and high power gaming is going to get even better on the iPhone and iPad

Although I will say this: Apple has developed its own programming language called Swift, and it 'totally rules'.The room just went bonkers.

11.42 - Apparently Epic had to keep turning the number of objects up and up as they didn't think it was possible on a mobile. As soon as iOS 8 is available, Zen Garden will be in the App Store for free. That's going to fix a train journey when you're stressed.

11.40 - Epic showing off a 'Zen Garden' showcase. You can simulate 5000 petals on the screen at once and interact with all at once. You can have loads of fish with AI - and Metal frees up CPU space to be able to do this.

This looks like it could be a gamechanger. Thank you, thank you. I'm here all week. Try the veal.

11.39 - This looks impressive. Console level graphics on an iPad - Tim Sweeney from Epic Games is on stage to talk us through it.

11.37 - Metal is the way the new devices will be able to render 3D graphics more effectively than ever before. Currently there's a heavy layer between the game and the hardware, which means up to 10x faster elements to make everything more slick.