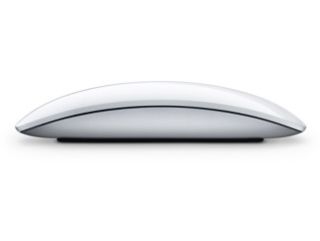 TechRadar has had a good play around with Apple's latest peripheral today – the multitouch Magic Mouse - read on for our initial thoughts on the latest in computer input tech from Cupertino's product designers.

The initial response on seeing the new (wireless Bluetooth) Magic Mouse is how sleek and sexy it looks (in as much as you can describe a computer mouse as 'sexy').

If you're an Apple user, even before you've picked it up and played with it, you already want one, because you will like the look of it on your desk.

Apple's chief design guru Jonathan Ive knows the value of cool accessorising, after all. And the company's marketing messages have always stressed the equal importance of looks and product design alongside ease-of-use intuitive functionality and cutting-edge tech.

This is why people shell out (often obscene) amounts of money on Apple's computers and gadgets and peripherals. It's why PC fanboys work themselves up into a frenzy of barely-contained anger when presented with new kit from Apple ("it cost HOW much!?").

And it is also why the Apple Store on Regent Street has the highest footfall of any store in the UK. Go. Figure.

And here we are again, talking to Apple's PR reps and product marketing execs who genuinely are excited about their new products. We know this, because they tell us how excited they are around thirty times over the course of a half hour presentation. Roughly around once a minute.

But are we excited? Can we drum up excitement over a computer mouse?

The second thought when you pick the Magic Mouse up and hold it in your hand is that this is a surprisingly weighty and solid bit of kit. You could do some serious damage if you used Apple's new peripheral as a weapon to smash somebody in the face. Best if you don't though, as it may void the warranty.

The aluminium base (with two plastic rails) and translucent plastic top seem to all have been put together very well. The build quality is pretty much faultless and the mouse looks like it could survive being dropped from quite a height. Though we didn't get chance to test that out at Apple's HQ today!

Once you've coo-ed over (or sneered about) the look and feel of the thing, you scoot it around the desk and it feels pretty damn good. It's nicely weighted and the hidden two left and right buttons click audibly when pressed. In short, it works perfectly well as a nice-looking wireless mouse. And there are no side-buttons or scroll-wheels or any other extraneous gubbins to get in the way of the main function of the mouse – which is using your hand to direct a cursor on the screen in front of you.

Touch me, feel me, please me

Now to the fun bit.

The Magic Mouse's multitouch support rocks. You can swipe your index finger across the mouse to scroll a document or webpage or photo left, right, up or down. And while some might prefer the tactility of the traditional scroll-wheel on their current mouse, we have to admit to being immediately enthralled by this simple new design.

Less enthralling was the two-finger swiping moves – which can be used in iPhoto, for example, to move horizontally between photos. It worked, but it just didn't work as well as the single-finger scrolling. And it felt far less intuitive. However, saying this, after an hour or two of using the mouse, perhaps the two finger swipe will become second nature. We hope so.

And then a minor disappointment when we tried to 'pinch zoom' with the Magic Mouse, much like we do on the iPhone. And we were immediately disappointed to discover that the feature was not supported by the multitouch, because of the curvature of the device. Which sounds a little bit of a lame reason to not build it into the thing, frankly. We can only hope.

Instead of zooming through a pincher movement with your thumb and finger, you need to hold down the Control key on your keyboard while scrolling up and down with a finger on the mouse. Less intuitive than the former movement, but again, something we might get used to after a few hours of use.

Apple's Mighty Mouse will work with any Mac running OS X version 10.5.8 or later, providing you have the latest Wireless Mouse Software update 1.0. installed. An Apple rep informed TechRadar that some of the 'basic functions' will be compatible with Windows PCs but didn't go into any further detail on what these were.

Full review very soon. Once we've spent a few more hours getting our paws all over Apple's new Magic Mouse. For now you can drool over the pics of the Magic Mouse here. Or laugh at them. Depending, of course, on your own personal levels of fanboy-itis.