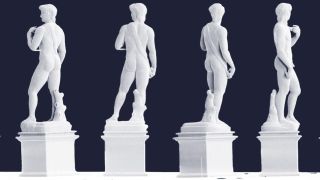 The famous statue of David by Michelangelo is over 5 meters tall in real life, but has been recreated by a 3D printer as an incredibly tiny model – still maintaining its precise detail (as shown above), but being only 1mm tall.

Researchers at ETH Zurich University used a 3D printing method invented by Giorgio Ercolano, R&D process engineer at Exaddon, and also created a second model of the statue which was 10 times smaller (so around 0.1mm), although it didn’t have nearly the same resolution and detailing.

Note that the statues were fashioned out of copper and printed in one single seamless process, with no requirement for supports or templates during printing.

These are certainly incredible feats and demonstrations of 3D printing themselves, but the miniature David statues are just a vehicle to highlight the potential of this technology, which could have major ramifications in the wider electronics and computing industry.

Exaddon reckons that its CERES additive micro-manufacturing system (additive manufacturing is another term for 3D printing) could be used by manufacturers to connect computer chips together, or perform precise repairs on microelectronics systems.

The larger David statue took some 30 hours to print, but the incredibly minuscule version only took 20 minutes to create.

Peter Rüegg of ETH Zurich explains: “The core component of the process is a micropipette coupled to a cantilever; this makes it possible to monitor the force with which the point of the pipette touches the substrate. With this assembly, the researchers can electrochemically deposit dissolved metals onto an electrically conductive substrate with a high degree of precision.

“Thanks to the optical force measurement that automates the process, they can build minuscule metal structures layer by layer. Exaddon adopted this micrometal printing method and improved on it, particularly as regards its speed.”

Giorgio Ercolano further observed: “Our deep understanding of the printing process has led to a new way of processing the 3D computer model of the statue and then converting it into machine code. That’s what makes the new David statue so extraordinary.

“This object has been sliced from an open-source CAD file and afterwards was sent directly to the printer. This slicing method enables an entirely new way to print designs with the CERES additive micro-manufacturing system.”