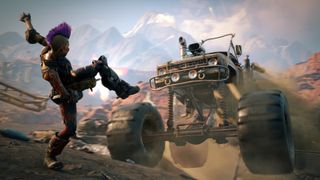 Taking a moment away from blasting the innings out of every insane inhabitant that resides in the world of Rage 2, and you might be surprised to find some shocking, nostalgic and downright hysterical Easter Eggs.

We’ve explored the furthest reaches of Avalanche Studios and iD Software’s newest release to bring you the most interesting references and secrets, featuring the likes of Doom, WWE and Pokémon.

Fair warning, although none of the Easter Eggs contain huge spoilers for Rage 2 and its campaign, there may be some minor ones to be aware of. Now that’s out of the way, let’s get to it...

The first Musk reference can be found in the Eden Space Center as part of Dr. Kvasir’s Ground Control objective. By making your way up to the second floor and walking halfway down the office block, you will find a framed poster on the left-hand side wall with a bald man pointing at the planet Mars. Sprawled across the image is a quote stating “Dare To Dream” from a man known as Elton Tusk, clearly a nod to the eccentric Tesla-owner.

Furthermore, by completing this mission players earn access to a secret bunker in the south-east side of the Torn Plains. Within the undisclosed property, more intel is shared about Elton Tusk, however we don’t want to ruin the surprise of what the developers cooked up. Let’s just say it’s quite mind-boggling.

Located throughout the wasteland, various signs can be found with the name ‘Mixom’ sprawled across them. Fans of Doom may instantly recognize Mixom Tools company or Mixom as the purveyor of tools, weapons and various devices in id Software’s Doom series - namely Doom 3 and the 2016 reboot.

This one in particular (see above image) was spotted at the Desert Kindling pit stop in the Sekreto Wetlands.

For those that skipped out on the first Rage outing, US marine lieutenant Nicholas Raine took the role of the silent protagonist. Set 30 years after the events of the original, it’s fair to assume that Raine would pop up in some manner.

Sadly, only accessible for those that pre-ordered the game, John Marshall will ask Walker to go speak to an old friend of his in the Wetlands once power has been restored to his unit in Gunbarrel.

The mission, named ‘Cult of the Death God’, sees the mysterious old man send Walker to hunt and kill a cult of deranged mutants who worship an image of Nicholas Raine. Once the horrible muties have been disposed of, players gain access to Raine’s armor and gun, with the old man telling you to keep them as Nicholas Raine has no need for them anymore. Spooky.

Developers of Rage 2 clearly must be fans of WWE as the majority of NPCs in Trade Town Gunbarrel are amalgamations or small changeups of famous wrestler names and wrestling moves.

Some of the names found include Ronda Raynes (Ronda Rousey and Roman Reigns), Kenneth Alpha (Kenny Omega) and Steph Rollins (Seth Rollins). Not to mention, the automated voice box at the entrance to John Marshall’s bar is blatantly called Cactus Jack.

Half Easter Egg, half cheat but 100&  worth your time. An incredible voice pack from British actor and loveable cockney Danny Dyer can be unlocked for commentary over gameplay. To access the voice pack Walker must find Mangoo the Unborn, the wasteland wizard who can be spotted by his instantly recognizable balloon hut.

There’s just one problem with that: Magoo’s whereabouts are seemingly random. The best option is to use the Icarus gyrocopter and fly around the land until you spot the noticeable weather balloons. The Diamond Geezer pack can be bought from Mangoo for $1,000 of in-game cash.

Players can then enjoy the colorful use of language from Mr. Dyer featuring classic quotes such as “you absolute melt” and “proper naughty”.

As a sequel it seems only customary to throw a few Easter Eggs pertaining to the first Rage title. Loosum Hagar is one of the three leaders players encounter in the story, but Hagar also plays a part in the original game where she teaches protagonist Nicholas Raine how to throw a Wingstick at Ray’s Oasis.

On the ground floor of City Hall in Wellspring, on the right-hand side wall as players walk in, a picture hangs of Ray’s Oasis on the back wall. A nice touch.

Studio director and long-term id Software employee Tim Willets appears in Rage 2 as an NPC of his alter ego, Wimothy Tillits. The character can be found in Wellspring by going directly right after walking through the entrance. Here you will find Tillits doing some questionable actions in a dark, dingy corner while stroking a rat. Must be an inside joke...

The BFG 9000 is one of the most iconic guns from the Doom series and is accessible in Rage 2 for those that opted for the deluxe edition.

After completing the opening tutorial, keep an eye out for any crashing meteorites. Once spotted, head to the crashed comet where inside you’ll find the oversized weapon. Pick up the device and prepare to take out any enemies with this one-shot merchant of death. Remember with great power, comes great explosions.

Here’s one we never expected: Pokémon in Rage 2. Ok, not exactly but there is an Easter Egg taken from the early Pokémon games (Blue, Red and Yellow) found via any of the Trade Towns.

Truth be told, we stumbled upon this one out of pure luck. Riding the Icarus gyrocopter over the top of Wellspring transitioned Walker inside before revealing the text: “There’s a time and place for everything, but not now.''

This is a direct quote from Professor Oak who sends you this message whenever you try to ride a bicycle indoors. How crazy is that?