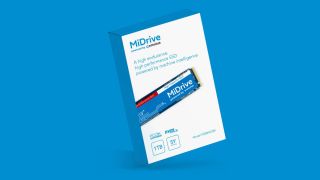 Enmotus hit the headlines two years ago when its partnership with AMD introduced free software that combined the speed of an SSD with the capacity of a hard drive into a single fast and easy-to-manage platform.

Now, in partnership with storage specialist and controller manufacturer Phison, the company has announced the MiDrive - a new category of drives that combines high endurance SLC and high capacity QLC on a single physical board.

Intel also tried to do something vaguely similar more than a decade ago with the Robson technology and more recently with 3D Xpoint/Optane memory that can be found into laptops and desktops alike.

Enmotus says that it uses its sophisticated MIA (Machine Intelligent Algorithms) to manage QLC’s inherent limitations, mostly around endurance, which can be problematic as SSD do wear out.

Five-layer flash or PLC is expected to have even worse endurance while at the same time closing the price per TB gap with hard disk drives.

The SLC part, in this case, is not used as a cache but as primary storage.

Enmotus hasn’t disclosed when these SSDs will hit the market and if yes, how much they will cost. We know that they carry a five-year warranty and will be available in a 1TB capacity (P200HEQM) as an NVMe storage device.