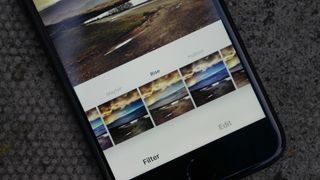 It’s a term that’s become synonymous with attention-seeking social sharers across the world, but ‘hashtag #nofilter’ is also a sign of just how overly doctored so many of the images we now all see and share have become.

As one of the pioneers and the industry’s biggest player, Instagram’s filters are the key culprit here. They haven’t just become a social necessity, they’ve transformed the look of almost a decade’s worth of images. Despite their global dominance, however, the man behind their creation, American photographer Cole Rise, isn’t as happy about their success as you might imagine.

Inspiring the look of a generation’s worth of photos comes with a lot of pressure, and Rise has mixed feelings about his involvement in the dawn of the filter.

Feelings that include regret, frustration and a sense of loss. Why? He explained to TechRadar.

A key element of Instagram, Rise, who also helped design the app’s icon, was brought in early on to lend his expertise. This wasn’t some high-profile consultancy role though, more just a couple of pre-existing friends chatting creativity and common interests over a couple of drinks.

“It came about over a lovely cocktail called the Corpse Survivor at a place called the Fire Bar in San Francisco,” he told us.

“I was just hanging out with my buddies, I was a photographer and I was just really interested in the app they were developing and had loved the beta.

“It was one start-up fella talking to another start-up fella about camera apps, which was something I was really interested in working on at the time.

“I helped them out early on, and they launched a few months later and I was technically user 75.

I remember telling them over drinks when it was just getting started, 'guys, this is going to be effing huge' and they were really sheepish about it.”

Having been a commercial photographer prior to Instagram’s 2010 founding, Rise’s unique editing techniques quickly caught the eye when Instagram’s founders spotted his early postings. For his part, though, their birth was more accident and convenience than design, using his custom-made filters as a quick editing solution.

“Selfishly I just didn’t have time to edit photos before uploading them to their platform and they had the same idea,” Rise explained.

“It was like if you’re editing photos, why not create a couple more filters.

“I thought this is great so I just injected my exact editing process for what I did with my work specifically into four filters.”

Having started with four, Cole ended up creating seven of the early, iconic Instagram filters, including: Sierra, Mayfair, Sutro, Amaro and Willow.

Going global with a sinking realisation

While you’d expect the man behind the look that shaped millions of photos over the past seven years to be ecstatic, Rise doesn’t look back entirely positive on the process. Although proud of his work and what Instagram has grown to be, the filters he created and shared came with a downside.

“It was quite a challenge for me when Instagram became popular to think ‘oh man, I’ve just given away what was special about what I was doing prior to that, adding textures to a photo, adding colours in certain ways and adding a vignette’.

“These filters were essentially what I thought made my editing unique, but then suddenly everyone was using them on their photos. That was a challenge. People might tend to think that’s an exciting thing, but it’s very strange for me.

“It made me try and best my old self and forced me to be creative again. If you look at my older work, it was a huge challenge to get away from that.”

He didn’t lose everything though. While his creative individuality was gone, he had a pretty cool reminder of what he had helped to create - even if that wasn’t a sizeable stake in the company that would be sold to Facebook for $1 billion in 2012.

“The Rise filter was called Specta originally, but they renamed it after me without telling me. That was good fun.”

As well as a not so little name drop, Rise managed to squeeze a cool little Easter egg of sorts into one of his filters.

“In Hudson there’s a little texture in it, and that’s actually a chalkboard in my kitchen, so everyone is putting my kitchen in their photos, which is very strange.”

Assessing the impact of his filters

As well as feeling like he’d lost his unique hook as a professional photographer, Rise quickly came to the realisation that although proving popular, these filters were regularly being abused and overused.

“Having made many of the original filters for Instagram, I realised that subtly is key,” he told us.

“It’s really important when taking photos not just to look at today, but think about what it’s going to look like tomorrow.

“The New York Yankees use ‘Early Bird’ for all their player profiles, the photos themselves are already dated, they look like they’re from 2010. Why? Because that filter was really popular at the time.”

Bizarrely for the man who created some of the most iconic filters in modern photography, Rise’s advice to photographers and Instagram users alike would be to use his creations sparingly.

“In terms of filtering, that taught me that I don’t want photography to be covered, I want it to be more elevated,” he said.

“How do you elevate an image and edit it so that it shines without covering it up and degrading it?

"It’s like information loss when you put too much over the top of it. I’ve since created and app called Litely that was exactly that, lightweight filters that didn’t cover your image. Subtlety is really important.”

It seems that Instagram, in the post-Rise era had a similar idea.

“If you use the Instagram filters now, you can slide them all the way down to zero if you want so they are barely visible,” he said.

“I have a rule when I edit a photo, I slide everything down to 50% and see how it looks. I try and bring it back to as close to as original as possible and build up from there to find that middle ground.

“In order to see a filter you have to be heavy-handed, but if you can remove it and get to the higher truth of what the image is trying to say, I think that’s better.”

With Rise’s day-one filters still in use, it’s hard to escape the impact his creations have had on the look of so many pictures that will exist digitally for centuries to come. This isn’t something that’s lost on the man himself.

“I couldn’t image it would change my life, but it really did. It changed everything after launch for a variety of reasons. It’s kind of an odd thing.

“Everyone’s a photographer in their own right now, it’s been democratised and people now have an idea and opinion on what’s a good filter and what’s a bad filter. Back in 2010, not so much. That was the early DNA that came out from a pretty great friendship in San Francisco.”