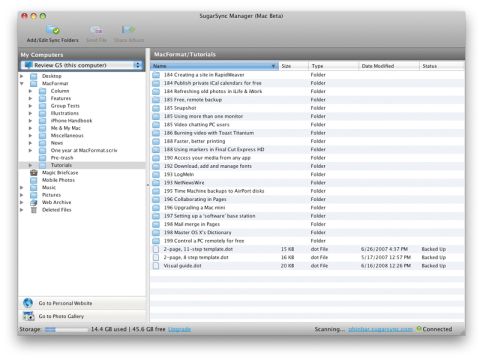 A very rich service that keeps your documents in sync across Mac, PC and even iPhone

Ten years ago, even owning one computer was still a bit of a novelty.

These days, however, many of us juggle multiple desktops and laptops, and have computers at work, in the living room, in studies and in schools.

The problem is that, at the crucial moment, you're always going to find that the file you really want is on another computer, and manual solutions are clunky.

And that's why we were excited about putting SugarSync through its paces. The basic idea is very simple: you sign up for a plan that gives you a certain amount of space on SugarSync's servers, install the SugarSync Manager on the computers you want to have in sync, then tell it what files and folders you want to share.

They're uploaded to the servers (the transfer's secured over SSL, and the files are encrypted with 128-bit AES) and the system manages revisions to the files to ensure that the file list you see on one computer is replicated exactly on the other.

Here's the clever part: it works on both Mac and PC, so if you're forced to use a Windows box at work, say, but have a Mac running at home, you can use SugarSync to keep your documents folder in sync between the two, optionally mapping /Documents on the Mac to the Documents folder on Windows, for example. And remember: what's not happening here is that your files are being sent from one hard disk to the other directly; everything's also stored on the servers.

This means that you can also access your stuff from any web browser anywhere in the world; when you sign up, you get a personalised subdomain – macformat. sugarsync.com, for example – that you can visit to get access to all the files you've chosen to sync. Let's spell it out: you'll be able to access your files from anywhere in the world even if your Mac is switched off. We'd like to see versioning support, mind you.

Better still, the company has produced a client for the iPhone and iPod touch that ties into the service as well. The files aren't downloaded to your iPhone per se; it's essentially an iPhone-friendly view to the files on the server, and so can be a little sluggish to navigate.

You can open and view some file types – Word files worked fine for us, though RTFs didn't – but even those that you can't view can be emailed. Cleverly, the system doesn't try to attach the file to an email and send it using the iPhone's own mail client.

As with emailing files from the web interface, you tell it what email address you want to send the file to and it sends a note that contains a link to that file so the recipient can simply click and download.

The only annoyance here is that the system uses the address book on the SugarSync servers, not the one on your iPhone. Yes, you can import your contacts, but it's a less-than-elegant solution. On a good note, it does some clever stuff with pictures and music that you sync, though.

Folders full of images can be viewed online in special galleries – without you lifting a finger to create them yourself – and you can share them with others. Visit these galleries on an iPhone or any other web-capable mobile and you should get a gallery optimised for the smaller screen.

Music tracks that aren't hampered by DRM can be streamed, too, on the web interface; it's a dumb file-and-folder system with no support for parsing your XML-based playlist files for iTunes, but it's nice to have the option.

We are, as you can probably tell, impressed. Changes are propagated between Macs and PCs with only a few seconds' delay for small files, and while the initial upload can be slow – the speed is actually throttled so as not to monopolise your connection, though a quick tinker detailed on the help site can remove this – it's easy, convenient and, in our testing at least, reliable.

The SugarSync Manager feels a little un-Mac-like, but it seems to behave itself, only eating up processor cycles during an initial file scan. It's not quite a bargain, but it made our lives much simpler; the iPhone access is the icing on the cake. It's a boon for business users.