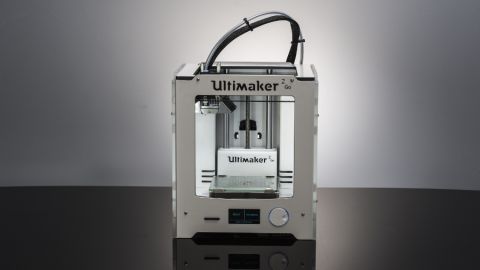 This smaller version of the Ultimaker 2 features a reduced sized unheated print bed limiting the printer to use with PLA, but for many this sacrifice of materials and print size could be well worth it for the far more compact footprint.

Ultimaker has built its name on solidly designed 3D printers, competent software and a print quality that is still unrivalled at this consumer level. The Ultimaker 2 was the model which showed that Ultimaker was a serious contender in the 3D printing market, with a machine that was more consumer-friendly in its design and broke away from the build-it-yourself market where the company originated. Now Ultimaker is one of the forerunners in the competitive 3D printer market.

Following on from the success of the Ultimaker 2 the firm has released two new models, the Extended and Go. The Extended is a taller version of the printer enabling much larger prints, and the Go is a smaller more convenient model. Despite the changes in size the mechanics of these machines are near identical to the original Ultimaker 2, and these similarities are reflected in the looks, styling and software.

Of course what you're paying for is the Ultimaker print quality which despite the reduction in size and lack of heated bed, is essentially still the same as its larger siblings.

The Ultimaker 2 Go might be compact but it certainly packs some weight. Without the filament loaded the machine weighs in at a massive 14kg yet only measures 258 x 520 x 287.5mm. This weight is both a good and a bad thing – bad if you need to lug it up and down several flights of stairs, but good when it comes to printing, because that added weight helps to stop the machine from wobbling during the print process (and wobble can be a major factor in the quality of your prints).

The weight comes from the quality of the build, which uses the same tough outer material as the Ultimaker 2, and in every way the construction of the printer is solid.

The Ultimaker series all use a Bowden Fed hotend with the filament being fed from the backend. Joining the filament on the back is the on/off switch and a USB port for firmware upgrades rather than tethered printing.

The design for the Ultimaker is tried and tested, and it works well for the two larger models, but here with the Go, as the name suggests, you feel that the small size should enable it to be carried easily, so some type of handle integration or grip would have been a worthwhile design addition. Unfortunately there is nothing like that here, and even the Lulzbot Mini has a small grip under the top of the frame to make it easy to carry. Instead the design really is just a shrunken Ultimaker 2.

Aside from size the other big difference is the print bed which unlike the rest of the range is unheated – this does limit the materials that you can use. However being restricted to PLA and other filaments that don't require a heated base is really not a bad thing. The new print bed measures 120 x 120 x 115mm, so it's small but still very usable. The design of the clips for the base remains the same, and while these hold the plate glass securely they can also be very dangerous to fingers.

Print models are loaded onto an SD card through the Cura software (the Ultimaker series isn't locked to this application so you can use other software such as Slicer if you feel the need).

The Go is the smallest of the Ultimaker series and its small footprint fits nicely onto a work surface. It certainly isn't as dominating as many other printers which is a big plus point.